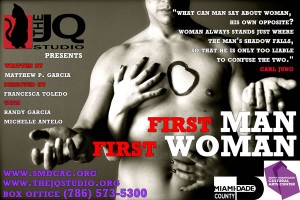 The story of the oldest struggle in human history, the war between love and hate.

“What can man say about woman, his own opposite? Woman always stands just where the man’s shadow falls, so that he is only too liable to confuse the two,” Carl Jung.

The JQ Studio Presents the world premiere of First Man/First Woman by Matthew Garcia. A tale using a dreamlike approach to the complexities of love using the Eden story. In her debut as a performing arts theater director, Francesca Toledo describes the show as a story of the oldest struggle in human history: the war between love and hate.