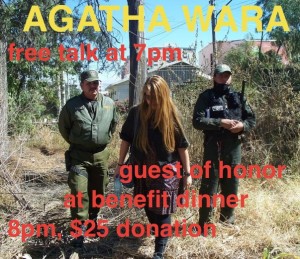 The BFI presents a talk by curator Agatha Wara followed by a benefit dinner for BFIâ€™s big move!

The BFI is excited to welcome Agatha Wara during her Florida stopover en route to Bergen, Norway, where she will join the team of the Bergen Assembly. Wara will present a public talk entitled “The Appeal” (referencing the Gucci Mane album) which refers to ideas of “attraction” that have to do both with Wara’s thesis exhibition at Bard and materialist philosophy. This experimental talk will be in the form of a ‘performative reading’ of a single artwork.

Wara finished her Masters degree at the Center for Curatorial Studies at Bard College in 2012 after being a part of the BFI team from 2008-2010, during which time she co-created and curated the first WEIRD MIAMI bus tour and visitor center. She will be the curator of the WEIRD MIAMI group exhibition slated to open during Art Basel Miami Beach 2012. Please join us after her talk for a benefit dinner at the BFI where she will be the guest of honor. All proceeds from the benefit will be used to cover BFI moving expenses.

This is a public program part of WEIRD MIAMI, a project to integrate the South Florida community with creative city tours that turns locals into tourists as they discover unnoticed and unknown places while tracing undocumented histories, redrawing maps and making new friends. WEIRD MIAMI is funded in part by a Knight Arts Challenge Grant from the John S. and James L. Knight Foundation, and with the support of the Miami-Dade County Department of Cultural Affairs and the Cultural Affairs Council, the Miami-Dade County Mayor and Board of County Commissioners.