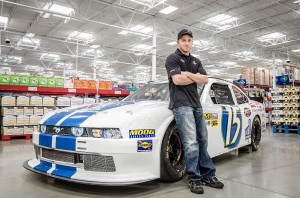 NASCAR driver Jeffrey Earnhardt, grandson of the legendary Dale Earnhardt Sr., will visit Seminole Casino Coconut Creek for a meet and greet with local fans. With his #15 NASCAR Nationwide Show Car on display, Earnhardt will sign autographs in front of the Promotion Area located near the center of the casino.

Earnhardt started racing early with the Wythe Raceway in Rural Retreat, Virginia as the first racing venue for the fourth generation driver. The Hornet Division allowed him to race unnoticed until he scored three feature wins and finished in the top five in the division points, winning the Rookie of the Year Award. In 2007, he drove a #1 Chevrolet for Andy Santerre Motorsports in the NASCAR Camping World East Series. He finished 5th in the point standings and won the Most Popular Driver award at the seasonâ€™s end. During 2008, he competed in the NASCAR Camping World East once again, rallying to four top-5s and six top 10s in just 11 races. Several truck and nationwide races followed and most recently he has decided to run for a championship in the Rolex Grand Am series in a Ford Mustang during 2012.

For more information, please call Seminole Casino Coconut Creek at 954-977-6700, visit www.seminolecasinococonutcreek.com or www.facebook.com/seminolecasinocococreek and follow us on Twitter @SemCasinoCoCo.