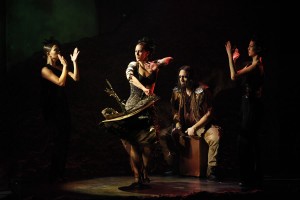 Pablo Croce Productions, a Miami-based award winning dance theater and screen production company, has announced the homecoming of the highly acclaimed SIUDY Between Worlds Entre Mundos, taking place at the Adrienne Arsht Center For The Performing Arts in Miami, on June 23rd and June 24th.

Following an impressive 50-show stretch of shows off Broadway in New York City last year, the mesmerizing dance theater spectacle returns to South Florida and its home town of Miami for three shows over two days at the Adrienne Arsht Centerâ€™s prestigious Knight Concert Hall. Co-created in 2009 by award-winning executive producer and artistic director, Pablo Croce, the progressive and contemporary fusion of traditional Flamenco with multiple urban dance forms, features a lead performance by the showâ€™s other founder and talented choreographer, Siudy Garrido, a 2011 nominee for the Drama Desk Award in outstanding choreography.

â€œWe are thrilled to bring our show back to Miami,â€ says executive producer, Pablo Croce. â€œThe city is our home, and will continue to be an inspiration for the show. Since developing Between Worlds three years ago in Caracas, Venezuela, the show has matured significantly and has grown along with the essential artistic elements and disciplines introduced to the performance by Siudy Garrido. We received rave reviews during our run in New York and we are pleased to bring our world-class show back to South Florida for a presentation that will appeal to every family, music and dance theater enthusiast.â€

A cast of 25 performers will take to the stage for Siudy Between Worlds, manifesting the primeval and futuristic vision of Pablo Croce and the choreographic excellence of Siudy Garrido. The show brings to life an unforgettable love story, told through the universal language of percussion and dance that is set in a futuristic world. In the wake of a catastrophic and climatic apocalypse, humankind grasps desperately to its existence, forcing the survival of small, segregated tribes. In a world without rain – lakes, rivers and seas are evaporating and tensions rise between the remaining tribes that are on the brink of war, leading humanity into a desperate struggle for survival. Confrontation prevails, with tribes competing for water – as the most important resource for life – in a world in which lawlessness is abundant.
From the moment the curtains are raised, Siudy makes a dramatic entrance, commanding the stage with her presence in a perilous landscape that provides the perfect juxtaposition between the art of melodic Flamenco and an aggressive hybrid of urban dance.

Bringing to Miami its largest production to-date, Siudy Between Worlds is a cross-discipline dance theater performance spectacle that integrates one-of-a-kind, progressive, Flamenco choreography using a sampling of live urban and afro percussion. Traditional instruments from across the globe are organically weaved into street beats and beatboxing, among other musical influences. Breakdance, hip-hop and funk dance troops fuse their movements in a portrayal of a struggle for survival. Award-winning Flamenco composer, Sevillian Diego Franco, scores the original music for Siudy Between Worlds.

Each tribe represents a core artistic talent that is carefully revealed throughout the intensity of the storyline. As a desperate world continues to unfold, the audience experiences the true extent of this spectacular, world-class performance, intricately weaved into an unforgettable and climactic ending.

Executive producer, Pablo Croce, interprets the performance as â€œShakespearean,â€ but simplistic in its outlook on drama. He describes both â€˜Romeo and Juliet,â€™ together with â€˜West Side Storyâ€™ as prominent influences on the theme of prohibited love that is a common thread throughout the tale. While presenting an internationally luminous cast of performers on-stage, Siudy Between Worlds Entre Mundos will be an uncensored showcase of Siudyâ€™s finest work.