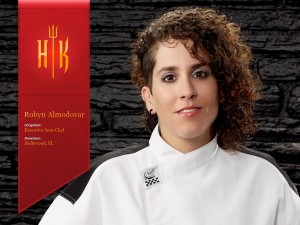 Local chef Robyn Almodovar has been turning up the heat on Season 10 of â€œHellâ€™s Kitchenâ€ since its debut on June 4th. As one of the 16 contestants still left on the chopping block, Almodovar will host a live viewing party from her food truck â€œPalate Partyâ€ at Tobacco Road on Tuesday, June 11th.

Guests will enjoy live entertainment from Iko- Iko front man Graham Wood Drout, a Tobacco Road staple for more than 29 years, happy hour drink specials starting at $2 from 4 p.m. to 7p.m., and an opportunity to mix and mingle with the Almodovar while she serves up fan favorites of soft shell crab ($12), meatball sliders ($8) and garlic truffle fries ($3).

Almodovarâ€™s popular food truck Palate Party, which promises to be a â€œparty in your mouth every timeâ€, was recently voted the #3 food truck in South Florida. The first food truck equipped with an actual stage, Palate Party has been custom outfitted with LED lights, a flat screen television and a culinary arsenal worthy of Gordon Ramsay himself.

Coming from a half Puerto Rican, half Italian background, Robyn Almodovarâ€™s childhood was filled with culture, vibrancy and a deeply ingrained passion for food. The Le Cordon Bleu graduate worked at several respectable restaurants in South Florida including The Forge and Danny Devito’s Devito South Beach before obtaining an Executive Sous Chef position at the Royal Palm Hotel. However, she still felt she was missing that â€œHEATâ€ in the kitchen so she purchased a 24â€™ food truck and founded â€œPalate Partyâ€, a fresh mobile food cafÃ© that utilizes locally sourced ingredients.

Considered Miamiâ€™s Oldest Bar, Tobacco Road remains virtually unchanged since its inception in the early 1900s. While ownership has changed, the primary purpose of the establishment â€“ a neighborhood watering hole â€“ has always been the same. Tobacco Road features an amazing menu of house-smoked specialties, award-winning burgers and cuisine that goes way beyond bar food. The Tobacco Road kitchen is open daily from noon to 1:30am.