THIS EVENT HAS BEEN POSTPONED

The announcement from the organizer:

It is with deep regret that we announce the postponement of the first annual UR1 Music & Art Festival due to circumstances beyond our control, including:

In consideration of these and other factors including the safety and wellbeing of our fans and performing artists we have come to this tough decision. Understandably this has had an ancillary effect on ticket sales and business logistics. It has always been our mission to produce events of the utmost quality and safety.

The new dates for the UR1 Music & Art Festival will be announced shortly. New dates will be chosen when weather conditions satisfy the safety of our fans, artists and staff. Once the dates are released you may chose to retain your ticket, as we will accept it at the festival. Alternatively should you choose to be refunded, information and instructions on how to do so can be found at www.ur1festival.com/tickets. We appreciate your patience and understanding.

We would also like to inform you that we are making every effort to showcase some of the talent that was scheduled to perform and exhibit at the festival in various locations around Miami. For those of you who would like to join us and the talent that will continue on to be showcased pending forthcoming dates to be announced, UR1 Ticket holders will have the opportunity to use their festival ticket at events around Miami during Basel week. A list of events accepting UR1 Tickets & Vouchers will soon be listed at www.ur1festival.com

The UR1 Music & Art Festival Family 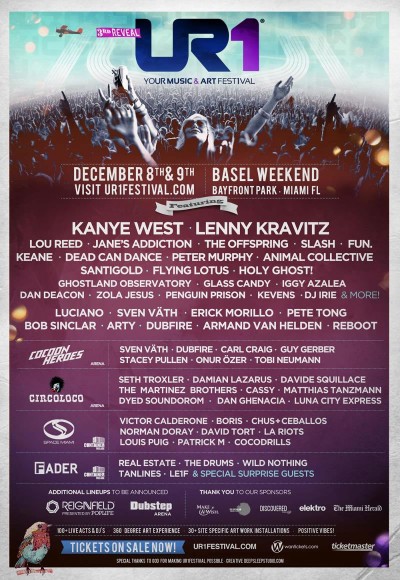 Alex Omes & Emi Guerra principles of GO BIG Productions and producers of Masquerade Motel Miami, Back In Black and The Surfcomber Pool Parties announce their newest concept the UR1 Festival. Taking place December 8th & 9th 2012 in Downtown Miami during the 11th annual Art Basel Miami Beach, the most prestigious art show in the Americas. Additional location details and lineup will be announced in phases throughout the Summer.

UR1 is the first ever Music Festival taking place during Art Basel Miami Beach, and the only one to fully Integrate art into all aspects of the event. A bespoke gallery along with site-specific artworks will be exhibited throughout the park featuring works of contemporary artists of different mediums curated by UR1. Expect large-scale big-impact works with that “Wow” factor. Some of the established Internationally recognized artists participating include Books Bischof, TYPOE, Agustina Woodgate, BHAKTI BAXTER and Locastro to name a few.

The inaugural UR1 Music & Art Festival featuring Kanye West, The Offspring and Lou Reed will launch during the most influential art week in the country, blending music with world-class artists Russell Young, Warhol Superstar Ultra Violet and Isaiah Seret across multiple genres and generations. Slated to coincide with Art Basel Miami Beach on December 8 â€“ 9, 2012 at Bayfront Park, 34 established and emerging contemporary and modern artists will explore performance, film, new media, sculpture, street art, painting and more with 30 site-specific installations.
The 32-acre landscape designed by Isamu Noguchi, the 20th centuryâ€™s foremost American sculptor, was revamped in the early 1980s to introduce Miami as the gateway to the Americas. His vision for Bayfront Park as a place for the people â€“ â€œa wedge of art into the heart of the new worldâ€ – is central to the concept of UR1 Festival, whose international roster also comprises Miami-based artists Agustina Woodgate and Typoe (Spinello Projects), Bhakti Baxter (Gallery Diet) and Andrew Nigon (Primary Projects). Under the helm of Art Director David Glass, UR1 Festivalâ€™s program will further spotlight South Floridaâ€™s brand of arts at Noguchiâ€™s historic site on a global stage. For more information, visit the website at www.ur1festival.com/art.

Tribute
Prescient to Miamiâ€™s arts boom, Noguchi described his plan for Bayfront Park in the â€˜80s, â€œI had a vision: I saw the earth as a sculpture.â€ This vision will be paid homage at UR1 Festival with Tribute â€“ a multi-media program produced by KIWI Arts Group, in collaboration with Long-Sharp Gallery.

Artist, best-selling author and Warhol Superstar Ultra Violet (Isabelle Collin Dufresne) will honor the master sculptorâ€™s iconic 100-foot â€œLight Towerâ€ â€“ the first of three Noguchi installations at Bayfront Park â€“ with one of the most rare and powerful outdoor single-beam laser installations. Set to ignite at sundown on Wednesday, December 5 during Art Basel Miami Beachâ€™s VIP night, a polychromatic light will shoot five miles into the sky from the tower and across Biscayne Bay, toward the Miami Beach Convention Center. LaserNet, the company that originally worked with Noguchi to bring his â€œLight Towerâ€ to conception, will now assist Ultra Violet in giving the structure a second life. The luminescent laser beam will be a bridge of light, visible from central Downtown Miami to Art Basel headquarters every evening through Sunday, December 9.

Long-Sharp Galleryâ€™s 5,000-square-foot exhibition featuring Russell Young will bring a musical sensibility to the Tribute series. Emerging on the fine art scene more than 10 years ago with a series of paintings titled â€œPig Portraits,â€ which captured public figures with a camera used in a police station, Youngâ€™s work has since appeared in the collections of prominent figures such as President Barack Obama, Crown Prince Pavlos of Greece, and of UR1 Festival headliner, Kanye West. Tribute will showcase the artistâ€™s pieces from the course of his earliest rock â€˜nâ€™ roll mug shots to those of legends Elvis Presley, Jim Morrison and Jimi Hendrix, with edition screenprints of Lou Reed, Mick Jagger and more. Curated by international art dealer and gallerist Rhonda Long-Sharp, this exhibit will also include work by David Datuna, the highest-selling artist at SCOPE 2011, and Gino Miles, Jean-Michel Basquiat, Roy Lichtenstein and Andy Warhol, to name a few. For more information, please visit www.longsharpgallery.com.

William John Kennedy, who photographed Andy Warhol and Robert Indiana â€“ creator of the famed LOVE emblem â€“ in the early 1960s, will participate in Tribute with a video montage of his signature photos. Referencing the rise of the Pop Art movement and the universal impact of Warholâ€™s mass cultural imagery on the fine art world, Kennedyâ€™s montage is a nod to both Noguchiâ€™s idea for Bayfront Park and UR1 as a festival with wide variety during art fair season. The photographerâ€™s piece will be projected on a Jumbotron on the main stage, serving as a backdrop for performances throughout the weekend. For more information about Kennedy, please visit www.kiwiartsgroup.com.

The Art of 5 Minutes
The Art of 5 Minutes (TAOFM) examines the music video through the lens of contemporary art. Isaiah Seret, director of Adidas UKâ€™s â€œTake The Stageâ€ commercial aired during the London 2012 Olympics, and Norah Jonesâ€™ â€œHappy Pillsâ€ and Cultsâ€™ â€œGo Outsideâ€ music videos, will lead an outstanding line-up of directors including: Ryan Staake (Diploâ€™s â€œSet it Offâ€); Philip Andelman (Lenny Kravitzâ€™ â€œIâ€™ll be Waitingâ€); and Gil Green (Lupe Fiascoâ€™s â€œBitch Badâ€). Taking a closer look at music videos or illustrated songs, which today can only be seen via alternative new media channels, TAOFM creator Esther Park views this project as a wholly site-specific experience. A pseudo â€œContainer Village,â€ consisting of large shipping containers in the northwest area of Bayfront Park, will serve as screening/exhibition studios curated by the directors as an aural, visual and spatial platform for their work.

Spinello Projects
One of Miamiâ€™s darling galleries, Spinello Projects, presents site-specific installations by artists Agustina Woodgate, Typoe and Sinisa Kukec. Woodgateâ€™s â€œ1111 Billboards,â€ unveiled as a commission for Locust Projects in 2011, will be revamped this year to cover the upper portion of Noguchiâ€™s â€œLight Towerâ€ during UR1 Festival. Whereas Ultra Violet will be reigniting the structure with a laser beam, Woodgate â€“ a rising star in the contemporary art world â€“ is renewing its faÃ§ade with hologram-like, reflective material. A reoccurring theme in the young artistâ€™s work includes adapting innovative use of materials to pre-existing architectural elements.
Typoe, whose most recognized works include â€œConfetti Death,â€ is carving a bust that marks a bold departure from his familiar materials and symbols of skulls, spray-paint cans and gunpowder. Aptly dubbed â€œBust,â€ the sculpture molded after an antique Victorian woman will tower 14-feet and is made of foam and resin. Its clean finish is pristine white and glossy, and like much of Typoeâ€™s concepts, will offer the viewer ample room for interpretation.

Sculpture, Murals and Mixed Media
In addition to the â€œLight Tower,â€ Noguchiâ€™s installations at Bayfront Park include the â€œChallenger Memorial,â€ and the â€œSlide Mantraâ€ — a 10-foot high white carrara marble slide that captured the artistâ€™s belief that play could lead to a new appreciation of sculpture.

Glassâ€™ program further celebrates Miamiâ€™s acclaimed outdoor murals with Douglas â€œHOXâ€ Hoekzema, Francesco LoCastro, Ruben Ubeira and Kiki Valdez. Ascribing his most recent influences to the emerging â€œGraffuturistâ€ movement that focuses on process and energetic movement, HOX will create two large-scale murals. In addition to using the vibrant colors indigenous to Floridaâ€™s street art palette for an 800-square-foot elliptical wall near the Bayfront Amphitheater, he will unveil a uniquely monochromatic black and white mural on the south wall adjacent to the â€œLight Tower.â€
Brandon Opalka, who notably painted a 130-foot tree on its side spanning the length of Dorsch Gallery’s west wall during Art Basel Miami Beach 2009, will bring this concept to life in a series of mixed media installations. For UR1 Festival, Opalka will install fluorescent lighting on the trunks of the fairgroundâ€™s palm trees, before applying layers of shrink wrap as both a protective film and canvas for painting. The intersection between nature and material is a running theme in the artistâ€™s work. When complete, Opalkaâ€™s trees will conjure images of flora re-imagined, with graffiti-painted trunks glowing from the lights within.

UR1 is also proud to announce two significant partnerships. The Andy Warhol Museum will present 13 Most Beautiful… Songs for Andy Warhol’s Screen Tests , with newly commissioned soundtracks by Dean Wareham and Britta Phillips. Additionally, Hyundai will fuel the RE:MIX Lab in a stand-alone 4,000-square-foot bespoke gallery space which will showcase exhibits in collaboration, a live art installation and three one of a kind custom built automobiles representing the ultimate in style, design, performance and innovation.

The Fader curated stage in the Container Village will be presented on Sunday December 9th, bringing indie bands Real Estate, The Drums, Wild Nothing, Tanlines, LE1F & Special Surprise Guests. Lighting Miami skies from Art Basel weekâ€™s start to finish, in a monumental light installation by Warhol Superstar Ultra Violet, one of the most powerful laser beams will be projected from Noguchiâ€™s 100-foot â€œTower of Lightâ€ in Bayfront Park to Miami Beach.