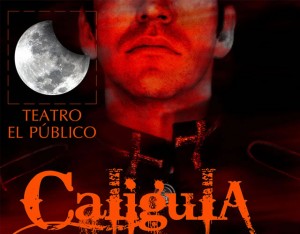 FUNDarte proudly presents Havana’s most controversial theater company, El PÃºblico, in their Cubanized, contemporary adaptation of Albert Caums’ classic Caligula. Teatro El PÃºblico electrifies the stage with Caligula, the tyrant whose love devours everything. Director Carlos Diaz gives the tyrannical Caligula a contemporary face, making him into an icon armed behind the mask of gayness and the glamour of the most illustrious uniforms, thus inciting us to other forms of misconduct way beyond the sexual.

Caligula’s weakness for masculine bodies and his intent to seduce and trample the innocence of Escipion are examples of his passion for the impossible. Others act as his game pawns, while everybody contributes in one way or another to a string of endless manipulations in this Havana-like Rome, where bodies come with a price tag and desire tucked between their lips. The desire to defeat a body that reflects the strength and vigor of his own youthful adolescence gives the obsessive Caligula a contemporary face, turning him into an icon armed behind the mask of gayness and the glamour of the most illustrious uniforms, suggesting forms of misconduct way beyond the erotic.

Caligula is presented as part of Out in the Tropics, FUNDarte’s signature GLBT performing arts series, which brings a full range of award-winning, contemporary GLBT artists and cultural events to South Florida annually.