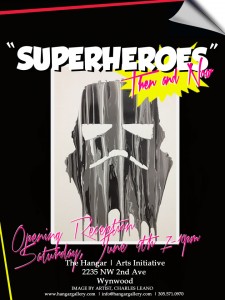 The HANGAR // Arts Initiative
We are pleased to announce our latest exhibition,

“A SUPERHEROE is a type of stock character, dedicated to protecting the public, Since the debut of the prototypical superheroes Superman in 1938, stories of superheroes-ranging from brief episodic adventures to continuing years-long sagas- having dominated comic books and crossed over into other media. The word itself dates to at least 1916.

Superheroes remain a staple of most illustrated seriel diction in Western culture, frequestly drawing both acclaim and controversy for their perceived influence on social and political issues addressed in their story-lines. In the twentieth century, superheroes and comic books were occasionally attacked as proponents of subversive political and social ideologies; on the occasions, they served to support and idealize the dominant values of national culture. They have historicall, also been used for commentary on political, social, sexual, and philosophical controversies.”