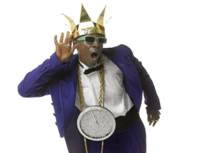 Group passes will be issued starting at 4 p.m. for Seminole Playerâ€™s Club members to have their photo taken with Flav, plus get his personal autograph on a casino- provided photograph. Joining the club is free, fast and easy, and all members will be eligible to win a 2012 Mustang coupe. The meet and greet will take place in the smoke-free event pavilion; must be 21 or older. The celebrity restaurateurâ€™s fried chicken will even be featured on the casinoâ€™s buffet that day.

Born William Jonathan Drayton, Jr. in Roosevelt, Long Island, NY, Flavor Flav rose to fame in 1982 with the controversial hip-hop group, Public Enemy. Heâ€™s been credited with popularizing the role of the â€œhype manâ€ who punctuates key lyrics and shout outs for audience participation. In Public Enemy, Flav is the back-up to Chuck D. A new CD is expected in August.

Though known for his outlandishness — including wearing a large clock around his neck, flashing gold teeth, and starring in several VH1 reality shows (The Surreal Life, Strange Love and Flavor of Love) — Flav was a young musical prodigy. He taught himself piano at five years old, sang in his family church youth choir and mastered numerous other instruments. In 2006, he recorded his first solo album, Flavor Flav â€“ Hollywood.