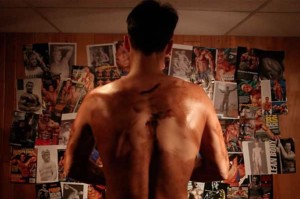 Charest-Weinberg is thrilled to present Olympia, the first public exhibition of Jacob Gossettâ€™s artwork. Olympia will open to the public on Friday, June 8th and will be on view through July 31st, 2012. There will be an opening reception on June 8th from 7-9pm.

Following the opening, Beacon, Gossettâ€™s electro-R&B group, will stage a performative concert alongside Michna (NY) and Heathered Pearls (LA) at The Vagabond in Downtown Miami. This performance is hosted by Charest-Weinberg and Ghostly International (view artwork).

Jacob Gossett was born in 1983 in Youngstown, Ohio and grew up surrounded by athletic culture. Over the past few years, his work has dealt with the cult(ure) of flesh: body politics, competition and aggression, and the physical ideal in the arts. Similarly, Beacon is known for their intensely visual performances and videos based upon sexual fantasy. For Olympia, Gossett has made four large-scale and tightly cropped paintings of flexing Mr. Olympians out of Creatine powder mixed with epoxy resin. Just as weightlifting breaks down the body so that it can become larger and more defined, these compositions, rendered in a dot matrix, are only cohesive when viewed from afar. As the spectator approaches the canvas, they disintegrate. The paintings will be presented alongside a looped video of an athlete training in a dank basement room covered in photographs of bulging muscles.

Olympia is a display of power that cannot be activated. Bodybuilding is performative in nature, yet the ideals of the performers are closer to Greek statuary. When training, these men strive for beauty, symmetry, and proportionâ€”in other words, sculptural qualities. In the 1977 documentary Pumping Iron, a young Arnold Schwarzenegger describes this connection:

â€œGood bodybuilders have the same minds when it comes to sculpting that a sculptor has. You look in the mirror and say, â€˜ok, I need a little bit more deltoids, a little more shoulders so I get the proportions right.â€™ â€

Schwarzenegger, whose image appears in the show, is a powerful symbol of the intersection of physical and political aesthetics. In this regard, one must remember that Olympia was also one of Leni Riefenstahlâ€™s most famous films. Gossett addresses this racial quotient with the colors of his paintings, which depend on two components: the Creatine supplement (his brand comes in either vanilla and chocolate) and the guidance of the widely used bodybuilding suit chart, which matches the color of the garment to the athleteâ€™s skin tone.
Jacob Gossett was a resident at Skowhegan in 2009 and graduated from the Pratt Institute in 2010.