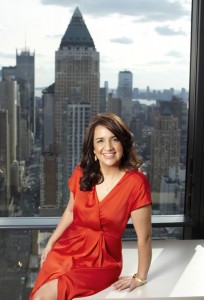 Macyâ€™s and Cosmopolitan for Latinas magazine invite you to a beauty presentation with Editor-in-Chief Michelle Herrera Mulligan. Learn the latest beauty trends and see the hottest summer looks for cosmetics in a beauty event hosted by Michelle Herrera Mulligan. Plus, receive a complimentary copy of the first stand-alone issue of Cosmopolitan for Latinas and get a chance to meet the editor-in-chief.

The new womenâ€™s lifestyle publication is targeted at English-speaking Latinas and hit the newsstands nationwide on May 1. The magazine will be a twice-yearly stand-alone print edition.

Michelle Herrera Mulligan is the editor of Cosmopolitan for Latinas, the premiere womenâ€™s lifestyle publication targeted at English-speaking Latina women. Prior to Cosmopolitan for Latinas, Herrera Mulligan served as managing editor of LasFabulosas.com, a syndicated website which celebrates Latina success, as well as an editor for Latina magazine. A prolific author and journalist for more than 10 years, Herrera Mulligan has worked to capture the surging Latina voice in the United States. She co-edited and contributed to Border-Line Personalities, a groundbreaking collection of essays on culture clash and coming-of-age as a Latin woman in America. The book was course-adopted at universities throughout the country and won an Outstanding Contribution to Hispanic Studies Award in 2006. In 2007, Herrera Mulligan edited Juicy Mangos, the first-ever literary collection of Latina erotica in English, which Pulitzer Prize-winning author Oscar Hijuelos called, â€œa collection of stories that offer the reader some real insights on what being a feeling and thinking Latina in todayâ€™s world is all about.â€ In September 2012, Atria Books will publish Herrera Mulliganâ€™s essay, â€œAnarchy Chicks,â€ as part of the anthology Count on Me: Las Comadres’ Tales of Sisterhoods and Fierce Friendship.