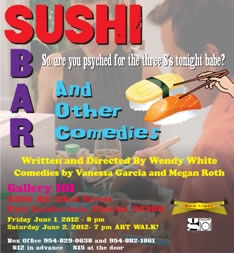 â€œSushi Bar and Other Comedies are totally inspired by true life experiences where joy and seduction are found in the most unusual of placesâ€ states playwright Wendy White, â€œComedies occur in the funniest places – expect the unexpected at your favorite Sushi Bar, French CafÃ© and Chess Game!â€

Adam White, Gallery owner, Gallery 101 went to see â€œWho Could Have Predictedâ€ in Miami in May 2011 at Wynwood’s GAB studio and decided to offer Wendy a permanent home in his Fort Lauderdale gallery surrounded by cafes, restaurants, boutiques and other galleries. “Wendy and New Light Theatre will be able to cast plays every month and have a solid home base from which to create. We are very excited to have her here; she is an immense talent that promises to get even bigger and better with this wonderful associationâ€ states Adam White, Gallery owner, Gallery 101(www.gallery-101.com).

Wendy White would like to thank Vanessa Garcia, Artistic Director of Krane, Inc. for all her support in the process of developing Sushi Bar and Other Comedies – In 2010, Garcia, the Founding Artistic Director of Krane, Inc. was named one of Miami’s 20 Under 40 by The Miami Herald for her work in theatre. For more information about Garcia, please visit: www.vanessagarcia.org

The dream team includes the fabulous Megan Roth, whose plays and monologues have been produced in Miami and broadcasted online. Her poetry has been published in Opium, POEM, Jellyfish, and several other literary magazines. Her fiction manuscript, Elizabeth, was a finalist in the 2011 Calvino Prize. She has also been a finalist in the James Jones First Novel Contest and the SLS Fiction Prize. Megan currently teaches Creative Writing and Literature at Florida Atlantic University and lives in Hollywood, Florida.