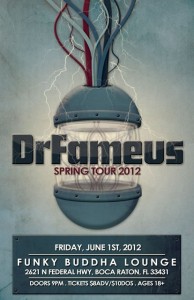 Brotherly Love Productions is thrilled to announce a show with Allen Aucoinâ€™s latest project, DrFameus, for an extra special intimate evening at the Funky Buddha Lounge & Brewery on Friday, June 1st. If youâ€™re unfamiliar with Allenâ€™s work with the Disco Biscuits you should know that this yearâ€™s AURA Music Festival alum was handpicked to replace their founding drummer and take the wheel of one of the sceneâ€™s most progressive jamtronic powerhouses. The redheaded wonder drummerâ€™s robotic precision attack has earned him nicknames like â€œThe Gingerbotâ€ & â€œThe Machineâ€ and heâ€™s studiously broken down the wildest Drum & Bass and Jungle beats produced in the early 00â€™s, reproducing them on his kit.

He will be joined by Atlantaâ€™s electro-folk troupe, Stokeswood, who has roots in SoFlo and left an impression on Boca when they performed two shows at the Buddha in early April with J2K and Arpetrio.

DrFameus is an electronic music project created by the versatile drummer, Allen Aucoin. Allen explores many realms with DrFameus ranging from breakbeats to drum ‘n’ bass to dubstep to techno/house. It is his ability to survey the crowd and then improvise that has allowed Aucoin to play in such diverse projects over the years. Allen began his musical career not onstage, but instead in education and composition. This included instructing and writing for award winning percussion ensembles and teaching drum lessons. While attending Berklee College of Music in Boston Massachusetts Allen was given the nickname DrFameus and it has stuck ever since. Like so many of us, college was not exactly a punctual time for Allen. He became known as the guy that was famously late all the time; so much that a friend gave him the honorary doctorate, DrFameus. After moving back to the southeast from Boston, Allen continued to work as a teacher and percussion instructor while touring with the band â€œSkydog Gyspy.” In 2005 Aucoin acquired his current role as the drummer for Philadelphia electronic act, the Disco Biscuits. Since winning the â€œdrum offâ€ held by the Biscuits in Atlantic City, Allen has played 450-500 shows with the quartet including shows at the Gorge Amphitheatre and Red Rocks Amphitheatre. www.DrFameus.com

Stokeswood is an incredibly unique, Atlanta based, Low-Endie Rock band with infectious energy, unpredictable live performances, and a fierce electronic edge. They coined the phrase “Low-Endie” rock to describe their layered mixture of pumping synths, powerful vocals, and irresistible dance vibe. Freâ€¢quenâ€¢cy; noun (pl.-cies) is the rate at which vibration occurs in radio, sound, or light waves. All of which can be simultaneously witnessed during a South Florida FREQ show. The eclectic sound of this band has kidnapped fans from all genres, and can be described as a neo-industrial, slightly hip-hop, alternative rock experience, or as they call it â€œMiami Club Rock.â€ www.Stokeswood.net