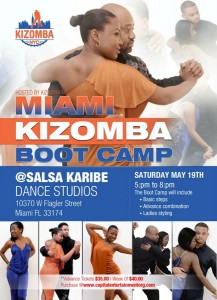 An amazing boot camp you don’t want to miss!

Kizomba is one of the most popular styles of dance and music in the lusophone African countries. Sung in Portuguese or Portuguese creole, it is a genre of music with a romantic flow mixed with African rhythm. The kizomba dancing style is also known to be very sensual.

Kizomba is native to Angola, with influences from other Lusophone countries and French Caribbean Zouk. It is also performed in other lusophone African countries and Portugal. It is known for having a slow, insistent, somewhat harsh, yet sensuous rhythm, and is considered to be a fusion of semba (a predecessor of samba) with other musical styles, namely Zouk. It is ideally danced accompanied by a partner, very smoothly and slowly, though not too tightly.