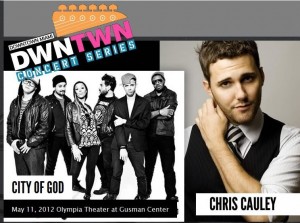 May 11, 2012 @ 8pm
The Olympia Theatre at the Gusman Center for the Performing Arts
174 East Flagler Street
Miami FL

The DWNTWN Miami Concert Series is every second Friday of the month (except March and September). The series features a free concert open to the public at Bayfront Parkâ€™s Tina Hills Pavilion from October through April, and at the Gusman Center for the Performing Arts from May through August. This event provides residents a way to beat the heat while still having fun. Downtown residents come mingle and enjoy great music in the heart of downtown Miami.

Join the Miami Downtown Development Authority Friday, May 11th as it kicks off its inaugural summer season at the Olympia Theatre at the Gusman Center for the Performing Arts with Performances by Chris Cauley & City of God! As always, food and drinks are available. The doors open at 7:00pm.

Chris Cauley gets the show started right, fresh from his stint on Season 2 of NBCâ€™s The Voice as a member of Team Adam, with a little soul from the ATL.
City of God kicks it up a notch by combining elements of funk, dance and hip hop with a unique style thatâ€™s all their own. City of God graced the DWNTWN Miami Concert Series stage back in season 3 and since then they have been sharing the stage with such artists as Usher, Shaggy, Ne-Yo, Sean Paul, The Jonas Brothers, Katy Perry, Flo Rida and more.

Presented by the Miami DDA, additional sponsors include the Intercontinental Hotel Miami, Miami Childrenâ€™s Museum and Miami New Times others involved include Embrace Events and Big Brothers Big Sisters. This season the Miami DDA has partnered up with Big Brothers Big Sisters for the Just Volunteer Miami initiative â€“ a campaign to encourage volunteerism in Miami. The DWNTWN Concert Series is free to the public and held on the second Friday of every month during sunset happy hour. Food and drinks are available. The Miami Downtown Development Authorityâ€™s DWNTWN Miami Concert Series will now be held year-round as a result of a $100,000 matching grant awarded by the John S. and James L. Knight Foundation.

The expanded concert series will continue to host monthly events during the winter months at Bayfront Parkâ€™s Tina Hills Pavillion and at the Gusman Center for the Performing Arts during the summer. For information on this show and the rest of the season, please go to www.dwntwn.com. You can also become a fan of the DWNTWN Miami Concert Series on Facebook or text DWNTWNR to 878787 for up-to-the-minute updates.

The Miami Downtown Development Authority (DDA) is committed to improving the quality of life for businesses, employees, residents, and visitors in downtown Miami. As an independent agency of the City of Miami, the Miami DDA supports business growth, infrastructure improvements, and services for Downtown Miami residents and stakeholders. In addition to its programs and initiatives, the Miami DDA is partnering with the City and other government entities to strengthen Downtown Miamiâ€™s position as an international center for commerce, culture, and tourism.

Through its DWNTWN campaign, which sponsors programs such as free outdoor concerts and special networking events, the Miami DDA drives consumers young and old to the region with the goal of supporting existing businesses and transforming Downtown Miami into a thriving, 24-7 urban epicenter. The organization is governed by a 15-member board comprised of three public appointees and 12 downtown property owners, residents and/or workers. For more information about the Miami DDA and Downtown Miami, please visit www.MiamiDDA.com.