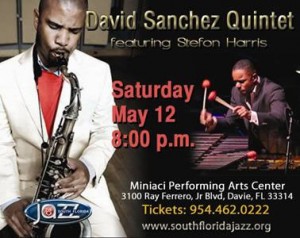 Tickets are $40 ($30 for South Florida JAZZ members and $15 for students under age 25 with I.D.) and may be purchased from the Broward Center Box Office by calling 954.462.0222, option #4 in Broward County; also toll-free at 877-311-SHOW, as well as online at: www.southfloridajazz.org, the presenting organizationâ€™s official Web
South Florida Jazz welcomes two of the artists featured in the 2010 Cuban-American cultural documentary Ninty Miles Project filmed in Havana, saxophonist David SÃ¡nchez and vibist Stefon Harris in concert with an All-star Latin jazz quintet.

South Floridaâ€™s premier modern jazz organization is excited to privileged to present some of the most creative musicians in modern jazz in the Latin Grammy-awarded saxophonist David SÃ¡nchez Quintet featuring the critically acclaimed vibist Stefon Harris. The band will reprise much of the repertoire created for the Ninety Miles Project, which was a collaboration with Cuban musicians in a distinctly apolitical setting of musical cross-pollination.

Latin Grammy Award winner David SÃ¡nchez is regarded amongst the most profound tenor saxophonists on the jazz scene working today. Jazz critic Howard Reich saluted the young bandleader saying, â€œTechnically, tonally and creatively, he seems to have it all. His sound is never less than plush, his pitch is unerring, his rapid-fire playing is ravishing in its combination of speed, accuracy and utter evenness of tone.â€ Such is the acclaim and respect that SÃ¡nchez has engendered from critics, and fellow artists throughout the world as he continues to push the frontiers of mainstream jazz to incorporate a compelling and rich array of Latin and Afro-Caribbean influences, while remaining true to the tenets of the jazz genre.

David SÃ¡nchez began playing percussion and drums at age eight before migrating to tenor saxophone four years later. While a student at the prestigious La Escuela Libre de MÃºsica in San Juan, Puerto Rico, he also studied soprano and alto saxophones as well as flute and clarinet. The bomba and plena rhythms of Puerto Rico, along with Cuban and Brazilian traditions, were among the biggest cultural influences on SÃ¡nchezâ€™s early taste in music, but Sonny Rollins, Dexter Gordon and John Coltrane had the greatest impact on his playing.

SÃ¡nchez has also performed and recorded with Kenny Barron, Roy Haynes, Charlie Haden, Lalo Schifrin, Tom Harrell, and had the opportunity to perform with the legendary drummer Elvin Jones. Whether with Gillespie, Palmieri, Haden and his other jazz mentors, or under his own name, SÃ¡nchez has continued to tour extensively, bringing his mix of mainstream jazz with Afro-Latin influences to delighted audiences throughout the globe. Along the way, he has collected 10 nominations and two Grammy Awards.

This band performing for South Florida JAZZ is very special because all of the players are absolutely top-tier. Venezuelan-born pianist Edward Simon is among the most highly regarded pianists, especially in the modern Latin idiom. Bassist Ricky Rodriguez, plays in Latin and straightahead configurations and is in high demand; and drummer Adam Cruz is first-call from pianist Danilo PÃ©rez to the Mingus Big Band and is a gifted player. A special guest is vibist Stefon Harris, Jazz Journalists Association Mallet Player of the Year, who is among the top three on his instrument. Stefon joined David Sanchez and trumpeter Christian Scott in the excursion to Havana, Cuba in 2010 for the Ninety Miles Project of cross-cultural pollination resulting in an important BBC documentary and a recording. This band will be en fuego!