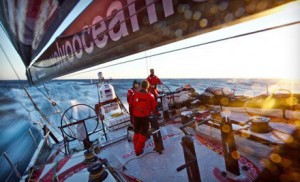 When countries cross oceans to meet up, it’s usually to sign treaties, be in the Olympics, or collectively overcome our fear of dolphins. Slip past the ocean’s bouncers with this Groupon.
Choose Between Two Options
* $350 for a full-day spectator-yacht charter to view the in-port race on Saturday, May 19 (a $700 value)
* $350 for the above yacht charter on Sunday, May 20 (a $700 value)

The day of on-the-water racing begins at 9:30 a.m., where a welcoming hostess greets spectators at the Volvo Ocean Race VIP information booth and dispenses informational gems about the day. Guests are welcome to explore the race village and VIP hospitality lounge and will receive an official Ocean Race Club gift bag with a souvenir and official brochure before departing on their chartered yacht. The 11 a.m. clock toll signals the yacht’s departure for the VIP race-viewing area and alerts the vessel’s live commentators to warm up their vocal cords with seagull impersonations.

As the world’s best ocean racers commence conquering the wind and the waves on the adjacent waters, champagne refreshments keep onboard thirsts in check before a lunch buffet with complimentary beverages sates hungers.

Volvo Ocean Race
Over the course of 24 hours, audiences await as six sailing vessels speed into the Port of Miami, one by one. At the helm stand six crews of 11 men from 15 countries around the world, many of them Olympic gold medalists and America’s Cup champions. In the past five months, each one has helped navigate a route from Spain eastward, around Africa, through Indonesian islands, skirting Antarctic waters, and up the eastern coast of South America. The race pauses in Miamiâ€™s Bicentennial Parkâ€”its only North American stopâ€”on May 6 for a 14-day celebration at the Downtown Miami Race Village, a 27-acre expanse filled with interactive installations and scheduled race-centric events.

Throughout the festivities, visitors can step onto the deck of a simulator that emulates the movements of a Volvo Open 70, the raceâ€™s official ship model, or gain access to the harbor to witness a real ship without having to wear a fake captainâ€™s beard. Both festival weekends contain a dense roster of events, including a classic car show, steamboat races, and paddleboard competitions, as well as multicultural food tastings and youth sailing regattas. On the final weekend, in-port races pit the tournamentâ€™s crews against each other on a short, close-quarters course within the harbor, giving audiences a chance to see the crews in action. Amateur VIP sailors can also pit their sail-wrangling and tide-control skills against the professional competitors in the harbor pro-am race before the six competing teams leave port again for their next leg to Lisbon.

Groupon is a Port Sponsor of the Volvo Ocean Race Downtown Miami Race Village and these are exclusive offers through them.