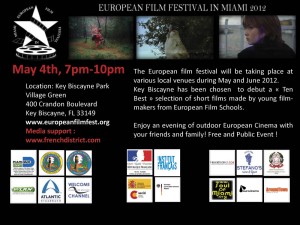 Join us for the European Film Festival Kick Off Party. We will be also celebrating our Short Film Award Night!

The European Film Festival will be taking place at various local venues during May. Key Biscayne has been chosen as one of the locations to debut a “Ten Best” selection of short films made by young filmmakers from European film schools. Enjoy an evening of outdoor European cinema with your friends and family.

This special event is free and open to the public.