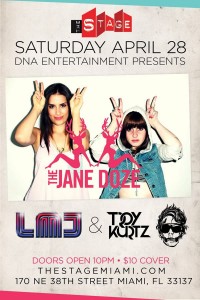 The Jane Doze is a mash-up/remix/DJ duo based in NYC. Group members Jen Mozenter and Claire Schlissel met in early 2010 and began collaborating shortly thereafter. By day, The Doze work at a major record label and an artist management company, respectively. They have established themselves as tastemakers in the digital world, receiving endorsements from a variety of artists and blogs. As the duo’s fan base and digital footprint grow exponentially, the pair continues to make their mark in the live music scene.

An ATLien, and self-proclaimed “Super Hero”, Leon Milne Jr. aka “LMJ” lives, breathes, eats, and dreams music. He is a classically trained violinist & pianist. A recording artist, producer, and songwriter by nature; his sound is a unique breath of the freshest air this planet has to offer. Influenced by a wide span of genres his music has global appeal and crossover marketability. He is known to be fond of short naps and long kisses.

Troy Kurtz is one of Miami’s most exciting and dynamic DJ/producers. His raw energy and natural talent exploded after being groomed for greatness in Miami as the youngest member of The Overthrow. His consummate music taste influences DJs and music lovers all over the globe via his contributions to one of the biggest electronic dance music blogs in the world, Gotta Dance Dirty.