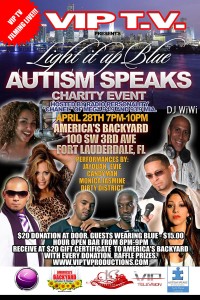 VIP TV, JC Entertainment and Autism Speaks present “Light It Up Blue” Charity Event for Autism Awareness.
Join us at America’s Backyard for a great cause!

One hour open bar from 8pm-9pm
Receive a $20 gift certificate to America’s Backyard with every donation.
VIP TV will be filming live! Event segment to be aired on VIP TV episode seen On Channel 10 Abc Network!

Event hosted by Radio Personality Chanel of Mega 94.9 and 93.9Mia.
Special performances by:
Jayquan
Evie
Candyman
Monica Jasmine
Dirty District
Special guest appearances to be announced! Come party with us, be seen on TV, and support a great cause.

Light It Up Blue, in its third year, is a unique global initiative to help raise awareness about the growing public health concern that is autism. Iconic landmarks around the world will Light It Up Blue to show their support.

Facts:
â€¢ Autism now affects 1 in 88 children and 1 in 54 boys
â€¢ Autism prevalence figures are growing
â€¢ More children will be diagnosed with autism this year than with AIDS, diabetes & cancer combined
â€¢ Autism is the fastest-growing serious developmental disability in the U.S.
â€¢ Autism costs the nation over $35 billion per year, a figure expected to significantly increase in the next decade
â€¢ Autism receives less than 5% of the research funding of many less prevalent childhood diseases
â€¢ Boys are four times more likely than girls to have autism
â€¢ There is no medical detection or cure for autism

At Autism Speaks, our goal is to change the future for all who struggle with autism spectrum disorders.

We are dedicated to funding global biomedical research into the causes, prevention, treatments, and cure for autism; to raising public awareness about autism and its effects on individuals, families, and society; and to bringing hope to all who deal with the hardships of this disorder. We are committed to raising the funds necessary to support these goals.

Autism Speaks aims to bring the autism community together as one strong voice to urge the government and private sector to listen to our concerns and take action to address this urgent global health crisis. It is our firm belief that, working together, we will find the missing pieces of the puzzle.