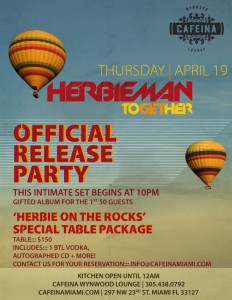 On April 19th, 2012 the new Herbieman “Together” album will hit all the major online retailers and to celebrate it, Gervasio will be performing with a new line-up of the Herbieman band.

The official launch party will take place at Cafeina Wynwood Lounge on the eve of the album launch. The band plans to play all 13 songs from Together and will gift a copy of the NEW Album to the first 50 people that arrive!

Cafeina Wynwood & Herbiman have collaborated to create a special “Herbie on the Rocks” table package for this long awaited return & most intimate performance yet!

There is a limited number of these special tables and it’s only $150! It includes 1 bottle of vodka, an autographed CD of “Together” and an extra special something from Herbieman (TBA).

Please use the online reservation form at www.cafeinamiami.com
..& type HERBIE ON THE ROCKS in the msg for this special offer.
OR you can connect with us at 305.438.0792 / info@cafeinamiami.com

To learn more about Herbieman:

Would you like to collaborate with the Herbieman Project? Check out their Kickstarter site to learn more: http://kck.st/zbp5n1

Just announced, NO COVER!
Must be 21+up to enter.

After five years in the making, Gervasio Goris will finally be presenting his second solo album in Cafeina, one of the coolest bar/lounges in the hip Miami Art District.
In 2003 after arriving in Miami on his sailboat he released his first solo album entitled â€œLittle Boyâ€ under the name Herbieman. The album created some local buzz and Gervasio played the local scene for two years.

In 2007 he opened a recording studio he called Neworld Music a worked on many musical projects for advertising agencies and independent films. But still he felt the urge to come around once again and create a wide spectrum of sounds that would represent Herbieman even better. It was then that he started recording the drum tracks for what would eventually would become â€œTogetherâ€.

Mixed and mastered by Goris himself using tons of analog gear and an old DDA Console, the album represents the change in Gervasioâ€™s life that occurred since he moved to Miami. It is an album about personal growth, acceptance of ones path but mostly about commitment. Right after moving to the US, Gervasio went to a full moon drum circle where he met the woman that would in 2008 become his wife and more recently the mother to his first child. Together could be described as an album about real love, a love that transcends the Hollywood depiction of infatuation and pinpoints the beauty of sharing the path with another soul.