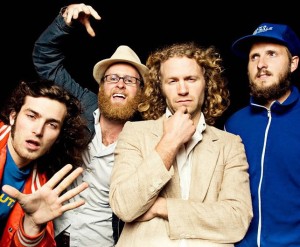 A refreshing Californian musical breeze will be blowing at The Stage (2011 Miami New Timesâ€™ Best New Live Music Venue). The self-described Disco Punk quartet Eyes Lips Eyes will be playing in Miami as part of their national tour, giving us three-o-fivers a chance to see one of the brightest and more fun bands that have sprung from the La La Land indie music scene in a while. 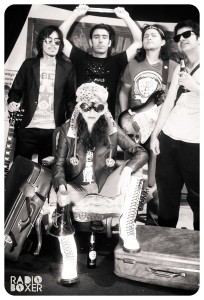 The bandâ€™s music has been featured in MTVâ€™s Real Word and Filter Magazine, they have play with major acts such as Modest Mouse and festivals including SXSW and Anti-Warpt. They will be joined by local indie bi-polar pop rockers Radioboxer which previous shows at The Stage have include lights show, confetti, fake blood and a whole lotta energy (also once a pound of goose feathers that covered the place in white fluffy fun. Feathers on their shows have been banned since then).

A bit more about EYES LIPS EYES: The upbeat, hook-laden parts, rehearsed at the bandâ€™s loft party-performances, recall elements of Television and other late seventies post punk, mixed with the unbridled, night out energy of The Strokes. Vocalist Tony Hello serves as a counter-weight to the band, and at times too invokes Julian Casablancasâ€™ or Alex Kapranosâ€™ (Franz Ferdinand) swagger and command of melody. But beginning with opening track â€œPrettyâ€ with its celebratory refrain of, â€œPretty enough to dieâ€¦â€ Hello exudes a quirkiness and unpredictability perhaps most akin to David Byrne (whoâ€™s song â€œPsycho Killerâ€ is covered by Eyes Lips Eyes as track three).

A bit more about RADIOBOXER: Radioboxer is an indie rock/power pop band; however itâ€™s members prefer the term â€œBi-Polar Popâ€ to describe their sound. The Band formed in 2009 in a warehouse in Hialeah (FL) and since then it has expanded across the local and national scene thanks to their unique sound and energetic, highly theatrical live shows. Awarded the honor of â€œBest Band In Miamiâ€ by the readers of The Miami New Times and has been featured on NBC, WLRN (National Public Radio), Miami Herald, Radionica, El Nuevo Herald, RevMiami.com, AOL Musica, Miami.com, ReMezcla.com, and Myspace Latino, among others.

For more information about the show please do not hesitate in contacting EYES LIPS EYES (brett@paperthinmedia.com), RADIOBOXER (band@radioboxer.com) or THE STAGE (gregp@thestagemiami.com).