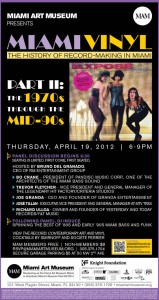 The second panel discussion in this three-part series, “MIAMI VINYL: The History of Record-Making in Miami,” hosted by Bruno del Granado, CEO of RM Entertainment Group, covers the mid-1970s, 1980s and 1990s, a period that saw Miami rise to the status of a global dance mecca, as well as the development of genres ranging from alternative music (Marilyn Manson, Nuclear Valdez, etc.) to Latin Freestyle (e.g., Nice & Wild, ExposÃ©, Company B), Miami Bass (2 Live Crew, etc.) and even Country (The Mavericks) â€“ not to mention the impact of The Miami Sound Machine. Following the panel discussion, stick around for a party led by guest DJ Induce spinning the best of â€™80s and early â€™90s Miami bass and funk, and check out The Record: Contemporary Art and Vinyl, and other works, on view in the galleries.