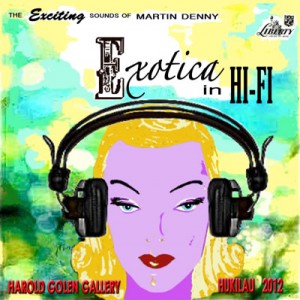 This year’s Hukilau art show pays tribute to “Exotica” record cover art. Exotica is a musical genre, named after the 1957 Martin Denny album of the same title, popular during the 1950s to mid-1960s, typically with the suburban set who came of age during World War II. The musical colloquialism, exotica, means tropical ersatz: the non-native, pseudo experience of Oceania (Polynesia, Melanesia, Micronesia, Southeast Asia, and especially Hawaii).[1] Denny described the musical style as “a combination of the South Pacific and the Orient…what a lot of people imagined the islands to be like…it’s pure fantasy though.”While the South Seas forms the core region, exotica reflects the “musical impressions” of every place from standard travel destinations to the mythical “shangri-las” dreamt of by armchair safari-ers.