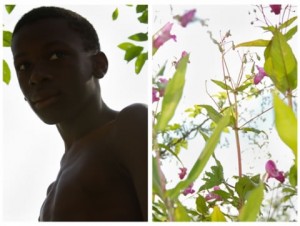 Dina Mitrani Gallery is pleased to present When You’re A Boy by Luis Lazo, opening on Thursday, April 12 at 6pm and on view through June 1st 2012. Luis Lazo’s first solo exhibition in the gallery illustrates, with photographs and videos, the brief time that is the transformation of when a boy becomes a man. The artist incorporates photographs of nature, such as clouds and blooming branches, to create a poetic juxtaposition and visual metaphor. The images evoke the introspective nature of these fleeting moments and the emotional angst that accompanies the fragility of this phase in a boyâ€™s life. Light plays an important role in the depiction of these elements, raising the narrative to a unique level of extraordinary beauty.

Luis Lazo was born in Chile, raised in London and has lived in the south of France for the last nine years. He studied Art History and Photography at Bourneville School of Art, before gaining his Honors Degree in Visual Communication from the University of Wolverhampton, U.K. He has worked as a stills photographer on feature films as well as photographing for publications such as Harpers, Queens, The Telegraph and Premiere Magazine among others. He has also photographed for fashion publications such as British GQ, Twill in Paris, and So-In in Japan. He has had solo and group exhibits in England, France, Amsterdam and was recently awarded Viewbook Photostoryâ€™s First Prize in the Conceptual category.

Dina Mitrani Gallery opened in November 2008 and specializes in international contemporary photography. The gallery represents emerging and mid-career artists, offers artists talks and lectures on photography as well as photo-based books. The gallery is committed to promoting its artists, as well as working with independent curators to produce unique group exhibitions.