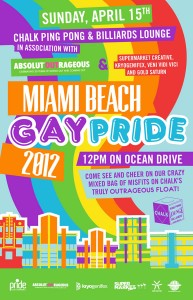 At Chalk, we want to celebrate the colorful diversity of our magic city, but most importantly take part in spreading the message of love and acceptance. Chalk is built on the foundation of reciprocity. Our READY, SET, GIVE! Program was developed to support local charitable and social organizations in South Florida throughout the year. Miami Beach businessman and philanthropist, Joseph Blount, founder of Chalk and the Global Health and Society Program at Emory University, is an avid advocate for childrenâ€™s programs, HIV/AIDS foundations, live performing arts and education for the less advantaged.

Chalkâ€™s philanthropic efforts include: fundraising, providing exposure within the community through both marketing and publicity, and by providing patrons fun entertainment with ping pong. Additionally, Chalk identifies and supports organizations that provide aid for arts and culture, education, health and human services, animals and the environment.

Immediately following the Pride festivities at 6pm head over to Chalk for â€œTruly OUTrageousâ€, our after party hosted by Tony Lima and Diesel Fox of Bear Nation, featuring sounds by DJ Pabel Lima and a special performance by JEI. Drink specials include $5 Absolut Cocktails and $3 Bud & Bud Light drafts. Come one come all bears, twinks, muscle Maryâ€™s, T-girls, and Sapphic sisters. Chalk is the place where everyone scores!