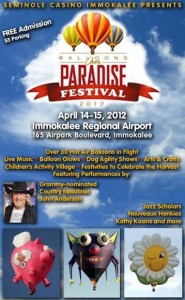 The colorful balloons will kick off each morning at 6 a.m. with an illuminated light show to the music of Drum â€˜nâ€™ Strings, a string quartet with a rock and jazz drummer. Festival-goers will be able to walk among the balloons as they inflate for a mass ascension into the skies and remain in air for several hours. Specialty balloons include the Flying Purple People Eater, a jolly monster with long legs and neon claws; Ham-Let, the worldâ€™s largest flying pig; and Miss Daisy, a flower that winks.

Attendees will enjoy a great line-up of activities, all to the sounds of Southwest Florida Big Band, Jazz Scholars and Gene Ferrari. Children will join in on the fun with storytelling, puppet shows, bounce houses and a rock climbing wall.

On Saturday, April 14, from 6 a.m. to 9 p.m., attendees will also enjoy the Harvest festival parade and the crowning of the Harvest Queen. Musical entertainment includes performances by country singer JJ McCoy and blues and R&B group Nouveaux Honkies. At 6:45 p.m., country star John Anderson will perform among the glow of these astonishing balloons.

The balloon festival will continue on April 15, from 6 a.m. to 4 p.m., with musical entertainment and other activities. At 2 p.m., ASCAP award-winning singer Kathy Kosins will perform jazz classics.

Parking is $5. Umbrellas and coolers are not permitted.