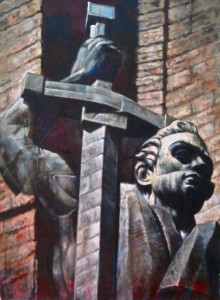 Exhibition on view until May 31, 2012
Lawrence Gipe: In La Valle de los Caidos at Primary Projects

In this work, Gipe challenges the viewer to consider forgotten histories as nostalgic, heroic and ridiculous all at once. The exhibitionâ€™s images are sourced from a wide swath of archival and contemporary material including historical photos, propaganda films and a Franco-era spy thriller that used the church grounds as a set. Gipe also uses images from current-day blogs on both the left and right-wing sides of the divisive controversy that clouds the churchâ€™s future.

As a site of reconciliation and â€˜atonementâ€™ between the warring factions of the Spanish Civil War (1936-39), the symbolic reputation of Santa Cruz de la Valle de los Caidos has been tainted by slave labor from the Popular Frontâ€™s prisoners-of-war in the precarious years of demolition for the basilica during the 1940â€™s. The mountain that surrounds the basilica is crowned with the worldâ€™s largest stone cross (towering over 500 feet high). Fascist leader Generalissimo Francisco Franco was interred under the altar upon his death in 1975, after years of Pharaoh-like obsession over the construction of his own funerary monument.

Today, the Santa Cruz de la Valle de los Caidos serves as a flashpoint for illegal demonstrations of the Right Wing â€˜Falangistasâ€™ in the face of the left-leaning government enacted during JosÃ© Luis RodrÃ­guez Zapateroâ€™s premiership in 2007. In 2010, renovations began on the enormous PiÃ©ta sculpture that towers over people visiting the basilica (the Catholic Church says these â€œrenovationsâ€ are actually an attempt to demolish the church). At one point, the face of Mary was removed and encaged with a scaffold â€“ Gipe uses this disturbing and striking image as one of the subjects in his tapestry-like paintings.

Lawrence Gipe (b. 1962, Baltimore) received his MFA from the Otis Art Institute of Parsons School of Design in 1986. A two-time recipient of the National Endowment of the Arts (NEA) Individual Fellowship Grant (1989 and 1996), several of his 45 solo exhibitions have been held at venues in Munich, New York, Los Angeles, Washington D.C., Atlanta, Chicago and the Kunstverein DÃ¼sseldorf. Gipeâ€™s work is held at the permanent collections of the Brooklyn Museum of Art, the Los Angeles County Museum of Art (LACMA), the Yale University Library, the San Jose Museum of Art and the Norton Museum of Art, Palm Beach, FL .

A mid-career survey, â€˜3 Five-Year Plans: Lawrence Gipe, 1990-2005â€™ was organized in 2006 by Marilyn Zeitlin at the University Art Museum in Tempe, Arizona. In 2001, Gipe completed a commissioned mural for the lobby of the Federal Reserve Bank Headquarters in Atlanta, Georgia. His work has appeared in publications including Vanity Fair, Harperâ€™s Magazine, The New York Times, The New York Times Magazine, ArtForum, Art in America , FlashArt, Art and Antiques, Architectural Digest, Elle Magazine, The Los Angeles Times and the Village Voice. Gipe is currently Assistant Professor of Painting and Drawing at the University of Arizona and lives and works in Tucson, AZ.

Primary Projects is a 4,000-square-foot space multidisciplinary space, positioned at the heart of Miamiâ€™s Design District, which aims to explore and promote multiple forms of aesthetic expression from established and emerging artists, alike. Utilizing extensive, and wholly specific, experience in producing street-level curatorial endeavors in Miami, the creative forces behind Primary Projects unite the commercial and critical efforts of artists, critics, curators, professionals and patrons; the result is the vital presence of an intelligent, alternative arts environment with an bold urban sensibility delivered through a diverse range of media. Regular gallery hours are Monday to Friday from 10:00 a.m. to 6 p.m. and Saturday from Noon to 5:00 p.m. For more information please visit www.primaryprojectspace.com and www.primaryflight.com.