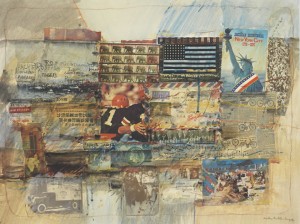 Any outsider might incorrectly assume that tropical Miami doesnâ€™t experience a change in its seasons. Yet, like any local will tell you, Spring brings a sense of even more desired sunshine, laid back behavior and lively moods than this beach town is accustomed to. In already colorful Coconut Grove, two longtime local artists will debut new, vibrant and powerful exhibitions on Saturday, April 7 as the Jim Hunter Gallery and Coconut Grove Arts Festival (CGAF) Gallery welcome â€œEvolution of Spiritâ€ and â€œRaw Energy / EnergÃ­a Cruda,â€ respectively.

With a master, retrospective collage collection, Erika Kingâ€™s â€œEvolution of Spiritâ€ displays iconic images of the Mona Lisa, Venus de Milo, Statue of Liberty, Native Americans, angels and even Marilyn Monroe, through the use of familiar fragments of sheet music, stamps and torn foreign currency. Considering the collages a process of evolving spiritual moments, the ethereal paintings recall her fascination with the sky and cloud formations while traveling by air in 1965 to 2012.

â€œThe splashes of paint and connecting lines evoke energy and vibration waves which I feel unifies us all,â€ said King. â€œI take my time to focus on a fond, deep search for spirituality within each one.â€

Originally from Philadelphia, Pennsylvania, Erika King is a long-time Miami-based artist known for her corporate, commemorative and celebrity collages. She received formal training from Lâ€™Ecole de Beaux Art in Paris and has exhibited throughout Europe, Venezuela, New York City and San Francisco. Her corporate collages have been commissioned by American Express, Texaco, United Way, Anheuser Busch, Blockbuster Entertainment, AT&T Wireless, Nokia, Radio Shack and AIG, among many other Fortune 500 companies.

Channeling similar self-exploration vibes, Meme Ferre debuts at the Coconut Grove Arts Festival Gallery next door, paintings with transcendent realities in her exhibition â€œRaw Energy / EnergÃ­a Cruda.â€ Combining colors of the Caribbean and the iconic mysticism of India, Ferreâ€™s pieces transporting the observer to separate experience. Like the energies of the trade winds of the tropics, each abstracted brush stroke stirs up an intense, almost physical, force across the pieces colors.
â€œIn some not too distant future, we will all be sustained by the gathering of the wind emitted by energy and strokes of a paintbrush,â€ said Ferre. â€œThese windy spirits, like distant drums, help us achieve a sustainable natural lifestyle, all using forces and energies as muses.â€

Ferreâ€™s artwork can currently be found at Museo de Arte de Ponce in Puerto Rico and Marjory Stoneman Douglas Biscayne Nature Center in Key Biscayne. She has exhibited in London, New York City, Washington D.C, Brooklyn, Miami, Palm Beach, Venice, Ibiza and Provincetown, as has also debuted performance art and installations at such events as the Miami International Film Festival and the Miami International Book Fair. Ferre received a BFA from the Pratt Institute and an MA from New York University. She is also a Museum Educator of Art in Public Places for Miami-Dade County.