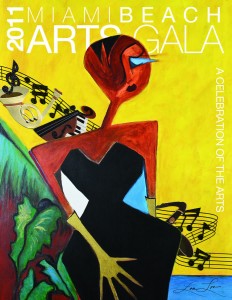 Viernes Culturales/Cultural Fridays are held the last Friday of each month in Little Havana, featuring artwork, music, and fine dining.

Lou-Lou was born and brought up in Puerto Rico. â€œMusic and art were a big part of my life to the point that I thought everyone did it; I took it for grantedâ€. Lou-Lou ended up going to college at SUNY Old Westbury. In New York she was able to continue her music and cultural Odyssey that her parents had started her on. â€in my family, education and culture are primary, so when I decided I wanted to paint I called my mom, and enrolled in school at the Art Student League; that was a great and amazing place. On New Year’s Eve 1999 I stayed in Puerto Rico and started school in UPR’s Escuela de Artes Plasticas recinto de el Viejo San Juan, another amazing incredible place. â€œ

Loulouism-Loulouismo comes from just plain down-to-earth music and amazing musicians playing hard, not to mention her Afro-Puerto Rican roots. She can best be described as a frustrated who paints music. Her works were recently chosen to be exhibited at the Miami Beach Arts Gala, where one painting served as cover art for the invitation and program, at the Stage Door Theater for a Christmas fund-raiser, and at MaiArt night in the Design District.