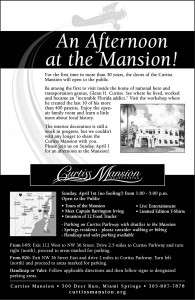 City of Miami Springs and Curtiss Mansion, Inc. announce a â€œSneak Previewâ€ of the restored historic South Florida home of famed aviator, inventor and visionary Glenn Hammond Curtiss originally built in 1925. Curtiss, the â€œFather of Naval Aviationâ€ moved to South Florida from Hammondsport, New York during the land boom of the 1920s. From 1920-1930, Curtiss developed the cities of Miami Springs, Hialeah and Opa-locka, Florida, before his death in 1930 at age 52. Before his untimely passing, Curtiss made a significant impact in the South Florida landscape. His vision of creating three different geographic areas among the cities allowed him to partner with James Bright creating landmarks such as Hialeah Race Track. On Sunday, April 1st, 2012 the community will have the opportunity to a â€œSneak Previewâ€ of Curtissâ€™ home, now a center for education, preservation and inspiration.

The legendary Curtiss Mansion, damaged by multiple fires, has taken thirteen years of perseverance and a true community effort to rebuild the home to its original grandeur. Curtiss Mansion Inc. (CMI), a Florida not-for-profit organization, was established to take the leadership role in restoring the home. â€œI fell in love with the story of Glenn H. Curtiss, and felt it was my duty to be involved in its restoration and share the stories of all unsung heroes,â€ says JoEllen Morgan Phillips, President of CMI. â€œWe are also excited by our partnership with Captain Barrington Irvingâ€™s STEM academy to be located at the Mansion in Miami Springs.â€ â€œThe City of Miami Springs is proud to partner with CMI. They have done an outstanding job in the restoration of the Mansion,â€ says Mayor Zavier Garcia. â€œOur community can only benefit from restoring this national treasure by our Founder, and we want to share it with the world,â€ says City Manager Ron Gorland.

The focus of the event is to share mission of the restored Curtiss Mansion as a center for education and a venue of historic significance and beauty. Be one of the first in the country to tour the home of Glenn H. Curtiss and enjoy afternoon music, food and the outdoors with your family, friends and neighbors!