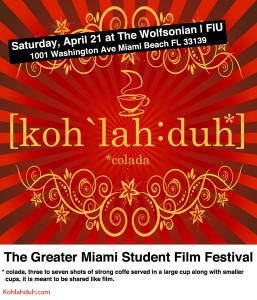 The festival will take place at The Wolfsonian – FIU Museum on April 21, 2012 from 3:00-6:00pm. Our purpose for the festival is to encourage young filmmakers in their undergraduate career in the South Florida area to continue their art by allowing them the opportunity to compete for a awards as well as allow their film to be viewed by a panel of industry professionals and later to be featured on the official film festival website.
Entries will be used in the promotion of the festival including but not limited to, film festival screening, advertisements for the film festival and inclusion in the festival website www.kohlahduh.com

Submission guidelines are as follows:
Open to all undergraduate students in the South Florida area, regardless of experience or major.
Entries can be from 3 to 7 minutes in length.
Entries must be submitted on a DVD in an MPEG4, AVI or MOV format, at least 720p.
Each entry must be submitted along with the completed entry form.
Submitting their film and entry form does not guarantee that the studentâ€™s film
will be featured in the festival, although all of the films will be posted on the festival website,
www.kohlahduh.com
All films submitted will be reviewed by a panel of selected judges (to be announced) and will be awarded points on a scale from 1-10 by each judge. The films that receive the most points will be shown at the film festival; the number of films shown is dependent on amount of entries, film length, and how long the festival will run.

Deadline: All films and fees must be submitted no later than March 15, 2012.