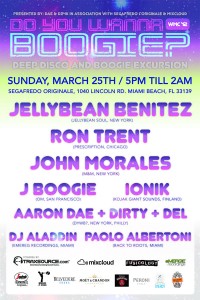 Segafredo on Lincoln Road, also referred to as Lâ€™Originale, has secured an impressive line-up of performers for the Winter Music Conference including local, national and international performers with resident DJ Aladdin at the helm. The deal sweetens with â€œNo Hangoverâ€ featured drinks and â€œAngelsâ€ by official sponsor Mercy throughout the week.

Segafredo Lâ€™Originale has been a gathering spot for thousands of locals, tourists, music-lovers and unique characters since 2000. Its success is closely related to Luca Voltarelâ€™s, co-owner ad manager, commitment to good music. For over the last 12 years he has ensured that the Segafredo Lâ€™Originale offers Free access to the Best music during the yearâ€™s most anticipated conference. 2012â€™s excursion through music will feature: