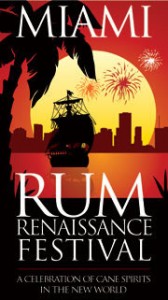 Rum lovers can choose between $40 day passes to the grand tasting events or $250 VIP passes granting all-access admission to a week long series of VIP parties and special events.

Grand Tasting Tickets and VIP Passes
Tickets to the Grand Tasting Events on Saturday and Sunday, April 21 and 22 are $40 in advance, or $50 at the door.

The fourth annual Miami Rum Renaissance Festival, the largest gathering of rum experts and professionals in the world, will commence April 16 to 22 in South Florida.

Mod Miami Music Parties
For all you swanky suburbanite swingers and fans of Mad Men, Mike Jones presents the ultimate groovy retro nightcap event with a twist as Mod Miami rocks the music scene at the Deauville Beach Resort on Saturday and Sunday evenings. Be there — or be square man.

Liar’s Club Pop-Up Bar
From the United Kindom, the best TIki bartenders and mixologists will make fantastic cocktails in the “Liars Club” pop-up bar from 11pm to 2:30am Tuesday through Friday evenings for a roisterous and rambunctious adventure in the Deauville Beach Resort’s famed Jazz Club.

The Great Rum Challenge
Spirited consumers test their knowledge of sipping rums and their ability to discern notable spirits in a blind tasting challenge designed to decide who is eligible to join the International Rum Expert Panel as a guest judge in their world famous tasting competition.

RumXP Tasting Competition
Rum Renaissance is host to the world-famous RumXP competition, where more than one hundred rums from around the world will be judged by an all-star international cast of authors, lecturers, trainers, historians, journalists, consultants, collectors, proprietors, mixologists and promoters of rum. Quite simply, the most respected group of rum judges in the world.

Celebrity Guest Seminars
Seminars and lectures will be presented by a veritable who’s who list of experts from the rum manufacturing, distilling and blending world, as well as luminaries of the cocktail mixologists universe, offering insightful programs to consumers and members of the trade.

Rum judges from around the globe will convene to conduct their annual International Rum Expert Panel Tasting Competition while rum brands from the Caribbean and beyond assemble to promote their products at VIP parties and grand tasting events for the spirits trade. The event also draws eager rum enthusiast consumers from far and wide.

The week-long series of events begins on Monday, April 16 with the Bartender’s Bash event hosted by the best bartenders and mixologists in South Florida, sponsored by Barritt’s Ginger Beer, along with Fee Brothers bitters and specialty products.

In addition to VIP parties hosted all week for the trade, spirits press and professionals, the Grand Tasting events on Saturday, April 21 and Sunday, April 22 at the Deauville Beach Resort on Miami Beach are expected to attract thousands of rum enthusiasts throughout South Florida and more than 36 countries.

According to event organizers Robert and Robin Burr, their Miami Rum Fest has doubled in size each year, a testament to the fact that consumer interest in sugar cane spirits is growing rapidly, faster than any other category of liquor.

“The vast range of fine rums now coming to the market reinforces our prediction that rum is indeed enjoying a renaissance of appreciation,” said Robert Burr, festival promoter and author of Rob’s Rum Guide. “We’re seeing an explosion of top-tier family reserves, luxury sipping rums and premium products on the shelves in South Florida, with no signs of abatement. New rums are joining the legacy Caribbean classics to bolster the category and provide consumers with a fantastic array of choices of sipping rums. We’re also seeing many new high quality rums specially designed for creating great cocktails.”

The Miami Rum Renaissance Festival offers an unparalleled opportunity for consumers and the trade to learn about — and sample — the best rums in the world over the two-day grand tasting events. The festival features more than 20,000 square feet of exhibit space at the Deauville Beach Resort.

“We’re very excited to see so many new rum brands and island lifestyle products participating this year,” said Robin Burr, exhibits manager. “We’ve nearly doubled the size of our main exhibit space once again to bring festival partipants a wider variety of rums and related products from around the world.”