Jessy Nite’s ‘Bad As I Wanna Be’, Jewels & Art Opens 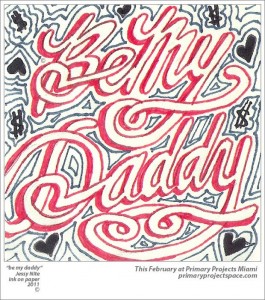 Wielding brash conï¬dence and overt sexuality as her metaphoric weaponry, Niteâ€™s practice follows a lineage of groundbreaking female artists who have relayed their personal experiences within patriarchal paradigms (both within and outside the realm of contemporary art-making) loudly and not without explicit, often scandalous terminology. Nite shares her observations through a gritty, street-inspired lens revealing the aspirations and inherent limitations of the drive to win and win big. Holding fast to the â€˜live fast, die youngâ€™ spirit of pink rock and clandestine urban culture, Niteâ€™s typographic work and multimedia installations are made for those who throw caution to the wind and publicly engage their creative (sometimes self-destructive) powers. Phrases and words reï¬‚ecting Niteâ€™s own brash, street-wise swagger act as both a draw and defense: they are warning signs to those who fail to meet Niteâ€™s own ruthless work ethic, but also a battle cry for all those who measure up.

A highlight of Niteâ€™s series of sculptures, print works and installations include a series of words, associated with Niteâ€™s aesthetic: Paid (spelled out with hot pink jewels), Waster (pushing out of the wall in mirrored splinters) and Disappear Here (threaded through with boldly colored string). The exhibitionâ€™s centerpiece will feature a full-size bed, where visitors are invited to lie down and see the words â€˜Bad As I Wanna Beâ€™ hover over them in wild cursive letters.

Jessy Nite is a multidisciplinary artist and graphic designer who studied shoe design at the Fashion Institute in New York and art direction at the Miami Ad School. Nite has exhibited both ï¬ne art and design projects in Miami, SÃ£o Paulo and Bangkok. She lives and works in Miami. â€˜Bad As I Wanna Beâ€™ is on view through April.