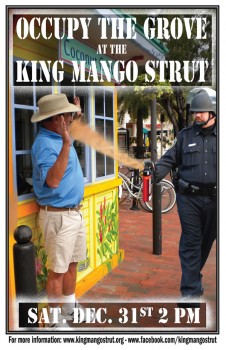 Join King Mango and his merry band of MangoHeads in Occupying the Grove on Saturday, December 31st. At 2pm, be there in your finest hats and facinators to witness the ceremonial dropping of the banana and the official start of the satirical parade that has been a model of civic engagement and civil uprising throughout the years. With â€œwinningâ€ material â€œripped from the headlines,â€ the Mangoheads will keep you laughing longer than Kim Kardashianâ€™s marriage.

The Grand Marshal this year is Ron Magill. With over 30 years as a wildlife expert and Communications Director for Zoo Miami, there’s no better king of the jungle to lead the animal house of MangoHeads.

Our Strut Celebrity is Katy Sorenson, the never recalled/never indicted/never removed-by-the-governor, former commissioner of Never-Neverland (dba Miami-Dade County.) Katy has been much closer to King Mango than Facebook’s 4 degrees of separation. Strut co-founder, the late Bill Dobson, worked for Katy.

In this interactive parade, the spectators â€“ the true occupiers of the Grove â€“ are encouraged to bring tents, lawn chairs and cardboard signs. You can wake up thinking you are going to watch a parade and end up watching yourself in the evening news IN the parade.

And if that wasn’t enough to make you plank, there will also be special appearances by The Gay Penguins, Gaddafi, Anthony Weiner, Donald Trump, Tim Tebow and Strut favorite, Lindsay Lohan!

The Pre-Parade activities begin at 1:30 pm at the corner of Commodore Plaza and Main Highway with the Little Mr. & Miss. Mango Pageant (for kids 4-10) hosted by Buzz Fleischman, Radio Buzz from WLRNâ€™s â€˜South Florida Arts Beat’. Unlike Toddlers & Tiaras, everyone is expected to win. The winners will ride the first float of the Strut.

All this entertainment is FREE and open to the public â€“ meaning it wasnâ€™t funded by TARP. There is plenty of parking along or near the parade route at CocoWalk, Mayfair, Coconut Grove Playhouse parking lot on Main Highway and Charles Avenue, St. Stephens Episcopal Church, Coconut Grove Elementary School, City garage at Oak Avenue and Mary Street, and the City garage next to the Sonesta Hotel. Click here for Coconut Grove map for parking.

For those who don’t want to drive, take the Metrorail to the Coconut Grove Station. There will be shuttle buses (Coconut Grove Circulator) picking up eager parade-goers every 15 minutes at the station and dropping off by the parade route.

Putting the NUT in CocoNUT Grove since 1982!