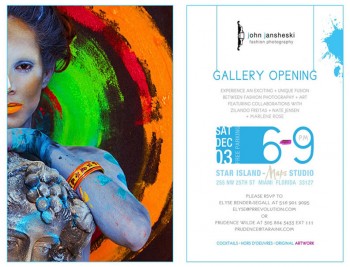 John will be hosting a gallery and artwork preview party at the Star Island-MAPS Studio on December 3, 2011 from 6-9 p.m.

John Jansheski, an emerging photographic artist based in Miami, Florida, will be hosting a gallery and artwork preview party at the Star Island-MAPS Studio on December 3, 2011 from 6 to 9 p.m.

This Miami-based photographer challenges the notion of conventional art, successfully blending the gaps between fashion, music, conventional art and photography into an artistic hybrid; the likes of which the world has not yet seen.

Mr. Jansheskiâ€™s work involves collaborating with some of the worldâ€™s most amazing and celebrated artists in the worlds of fashion, music and painting such as Romero Britto, Zilando Freitas, Coldplay and Cintia Dicker. John views all photography as pure art, as he feels there is something truly special in the manifestation of a magnificent idea turned into reality; regardless of the medium. It is this mentality that he conveys to the world through his collaborations that transcend the traditional boundaries of what we have come to know as â€œworks of art.” The conveyance of what is being viewed through the camera in capturing a moment of the human spirit, a beautiful view, or just a face emoting such feeling that the intent is unmistakably and accurately captured for the observer.

With plans to open a new 8,000 sq. ft. studio in the Wynwood Art District of Miami at the end of 2011, John is poised to make a splash in the infamous South Florida art scene next year beginning with his showcase at the 10th edition of Art Basel Miami Beach from December 1st to the 4th, 2011. Being â€œthe most prestigious art show in the Americas,â€ more than 260 leading galleries from North America, Europe, Latin America, Asia and Africa will take part, showcasing works by more than 2,000 artists of the 20th and 21st centuries.

This exclusive event will round out his latest artworkâ€™s premiere with a more intimate look at the world through the eyes Mr. Jansheski; all coinciding with Miamiâ€™s most popular art event.