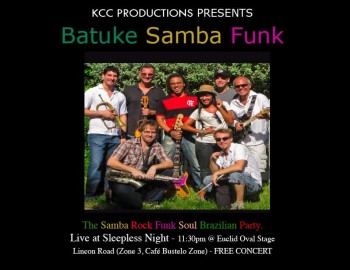 Batuke is the act of drumming on any surface, or with any object, that makes a sound. Recycled cans, plastic buckets and pieces of scrap metal have all been transformed into percussive instruments that enhance the musical atmosphere of this group established by Diogo Oliveira in 2008.

The core of Batuke Samba Funk comprises four musicians based in Miami, Florida. The group offers a fusion of Brazilian rhythms including samba and samba rock with classic American funk. While the core group consists of bass, drums, keyboard and voice, the ensemble is joined by trombone, female vocals and Brazilian percussion when performing with their full 7-piece configuration.

Bassist, composer and musical producer Diogo Oliveira is the creator of Batuke Samba Funk. He is one of the most recognized and accomplished Brazilian musicians working in South Florida. One of his recent musical productions, Braziian Voices Funky Jazz Show, was awarded â€œBest Show of the Yearâ€ by the Brazilian Press Awards in 2010.

Batukeâ€™s keyboard and woodwinds are performed by Brian Wolfe, an American originally from Alabama. Wolfe is multi-talentedâ€¦songwriter, composer and musical producer with particular focus on horn and string arrangements.

Goran Rista provides the dynamic drumming style that is a signature of Batuke. Originally from Serbia, Rista brings a drumming style defined by clean execution, mutli-layered range and intense power that evoke an instantaneous interplay between music and emotion.

The featured vocalist of Batuke is Robson Coccaro, an accomplished singer, music producer and event designer. He is one of the most distinctive vocal talents in the US, offering a sublime synthesis of groove and melodic character that have helped establish Batuke as one of the most sought after bands in Miami.