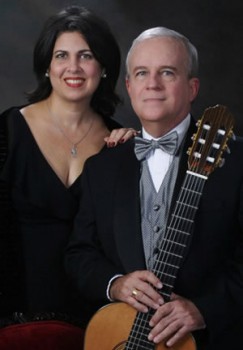 The concert will offer a panorama of French and Italian music from the early XVIII century composers until the present, including works by Giordani, Paisiello, Giuliani, Castelnuovo-Tedesco, De Visee, Massenet, Gounod, Ibert, Bizet, Dyens, and others.

Awarded the Order Alirio Diaz 2009 in Caracas, Venezuela and a Lifetime Premio Chitaristico Citta de Fuiggi 2007 in Italy, Carlos Molina is lauded as founder of the Cuban School of Guitar. With a performing career that expands 40 years, Molina has performed in some of the most prestigious concert halls in the world, such as The Kennedy Center in Washington DC, The Metropolitan Opera House in NY, and the Ateneo of Madrid, and has been featured at 55 international guitar festivals. Together, the Carlos and Marisa Molina Duo has performed in 15 international guitar festivals since 2001.

The Miami Classical Guitar Society is a non-profit cultural organization.