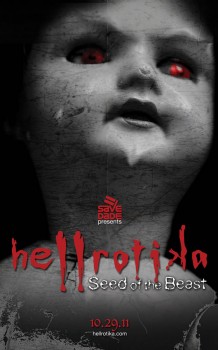 Last year Hellrotika: Circus of Lost Souls brought out more than1,200 partygoers, and even more are expected to attend this year’s celebration/fundraiser/horror show, which is praised as the “premier” Halloween event in South Florida.

Hellrotika: Seed of the Beast is planned as a perfect combination of dance party and immersive, multi-media experience with theatrical performances, a costume contest, food vendors and the latest dance music played by local night club DJs that include Pabel Lima, Doug Jackson, MIIK and Essential 6. This yearâ€™s event will also feature a Seven Deadly Sins fashion show, Go Go Ghouls and a â€œpose offâ€ performance by the House of Hellrotika. The night will be hosted by local comedian and actor, Michael Martini.

â€œWe hope that this yearâ€™s fundraiser will help us reach new audiences and take the SAVE Dade mission to greater heights. Not only have we sponsored a great Halloween party for the last 16 years, but weâ€™ve succesfully created an environment of inclusion and acceptance that goes beyond the limits of the LGBT Community,â€ said CJ OrtuÃ±o, SAVE Dadeâ€™s Executive Director.

Hellrotika: Seed of the Beast general admission tickets will be $40 in advance until October 14th, $60 after and at the door. Cocktails and food will be available for purchase.

The VIP experience includes premium open bar and hors d’oeuvres served in an exclusive VIP area. Free valet parking is included. Tickets are $150 in advance and will not be available at the door.

As one of SAVE Dadeâ€™s major fundraising events, all money raised at Hellrotika will fuel SAVEâ€™s efforts in fighting for LGBT equality.