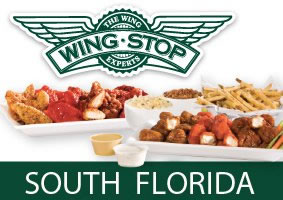 Seventeen winners to be announced throughout NFL season
To celebrate the return of football, Wingstop of South Florida has launched a contest where 17 winners throughout the season will receive complimentary Wingstop catering for their gameday party.

Fans can enter to win weekly at www.facebook.com/wingstop.south.florida and winners will be announced every Wednesday on the Wingstop South Florida Facebookpage. The winners will receive a Wingstop gift card of $100 to be used towards their next game day party dinner.

To participate in the game day contest, visit http://www.facebook.com/wingstop.south.florida. Wingstop will select a random winner weekly through the 2011 NFL Football Season. Contest valid in Dade and Broward Counties only. Entry deadline is December 28, 2011.