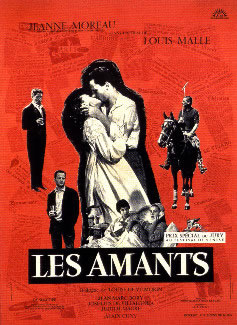 Bored with her husband, bored with her polo-playing lover, will the middle-aged heroine go away with the young man who gave her a lift that day when her car broke down on the way back to her country estate from a weekend with her lover in Paris?

The Lovers (Les Amants) is a 1958 French film about adultery and rediscovering human love, directed by Louis Malle and starring Jeanne Moreau. It was Malle’s second feature film, made when he was 25 years old. The film was a box office hit in France when released theatrically gaining 2,594,160 Admissions in France alone. The film was highly controversial for its depiction of allegedly obscene material when released in America.