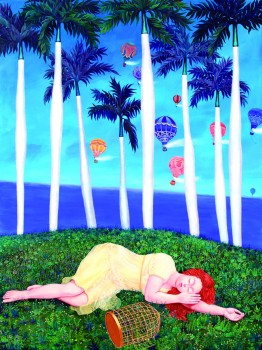 Cernuda Arte is honored to be hosting a one-person exhibition of paintings by Irina ElÃ©n, one of the most notable contemporary Cuban artists in todayâ€™s scene. The show entitled, When Dreams Come True, includes 22 paintings on canvas, depicted in oil and acrylic. It will be the first time the artist exhibits her work in the Unites States.

The artist will travel from Pinar del RÃ­o, Cuba to Miami to be present during this event.
The show will be open to the public until November 14.

The works featured in, When Dreams Come True, have as central focus the convergences of dreams and realities, this best understood as the connecting thread weaved by the artist to unfurl the images of her mythical universe.

In the land of Irina ElÃ©n â€“ in her personal magical world â€“ the woman figure is the main protagonist who moves throughout diverse ethereal sceneries recreated by the artist. Committed with great passion to the realization of her splendid works, elegantly finished â€“of precise execution and richnessâ€“ the artist succeeds at imbuing them with grace, freshness and metaphor.

Symbols of beauty, joy, youth, providence and paradise abound, together with certain constants that appear and reappear in her compositions, such asâ€“ the feminine imagery, the intimate-surreal setting, the sheer pleasure of fantasy, and the marvelous sense of craft.

Irina ElÃ©nâ€™s paintings reveal a sumptuous chromatic scheme and an impressive craft. Her meticulous and lyrical renditions are a feast to the eyes and evocative. Her body of work reflects, in essence, the bold talent of a young and promising plastic interpreter.

The exhibition is accompanied by a full-color catalogue, available to visitors.

The artist has presented one person exhibitions in Havana at the Casa Osvaldo GuayasamÃ­n, in 2005, and in Pinar del RÃ­o, at the Provincial Center of Visual Arts, in 2001.

Irina ElÃ©n has participated in ten international art fairs, and has been included in over twenty-five group exhibitions throughout her career. Her work has illustrated several childrenâ€™s books and has appeared in various magazines. The artist has garnered multiple awards and honorable mentions in juried art competitions.