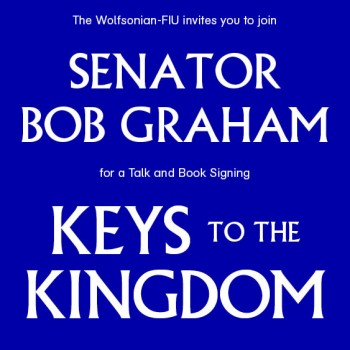 Keys to the Kingdom.
Former governor of Florida Bob Graham will speak about his new suspenseful novel, Keys to the Kingdom (Vangaurd Press, 20110. Following an explosive New York Times Op-ed piece about the 9/11 investigation, a former senator and co-chair of the Congressional Inquiry Commission is found dead near his Florida home. Carl Hiassen claims Grahams novel”delivers uncommon insight into the treacherous and sometimes frantic craft of intelligence gathering. It reads like a true story because Graham knows where the truth lies.” Following his talk, Senator Graham will sign books in the museum shop.