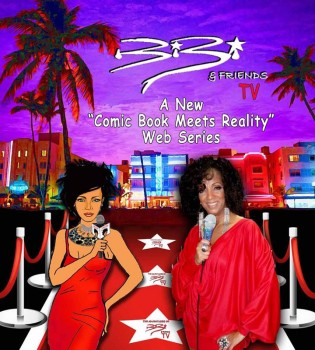 The Adventures of Bibi & Friends is a comic book about a fictional character with real life friends. Bibi is a world-renowned marketing, public relations and event specialist, living in Miami Beach, FL. Bibi represents top-notch clients and products throughout the world.

The Adventures of Bibi & Friends Launch BibiandFriends.TV With A Kickstarter Pledge Campaign!
BibiandFriends.TV is a new “comic book meets reality” weekly web series, that shows the behind the scenes production of creating and producing a comic book, from event to the page. The web series combines all the materials into a reality TV/comic book production.

The viewer gets to follow the drama and the excitement of covering events as well as seeing the process of transforming the coverage to comic book/animation format. The series will be a combination of animation and reality. The viewer also has an opportunity to be part of the adventure by appearing as a comic book character in a selected webisode.

Pledge levels start from $1 – $2,000 & up. With each level of pledge, the supporters are rewarded with gifts for contributing (including Bibi Book Editions, Bibi T-Shirts, appearing as a comic book character in an edition of The Adventures of Bibi & Friends, and Executive Producer Credit on BibiandFriends.TV)

The funds collected will be used for production & technology cost needed to produce BibiandFriends.TV. The more money collected, the more people we will be able to employ on the production this project. BibiandFriends.TV hopes to create a new job market by offering jobs to graduating film students entering the job market.