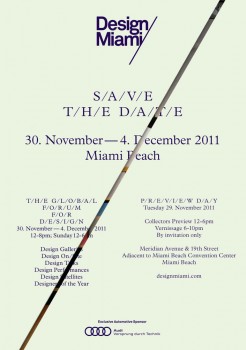 Tickets can be purchased for entry to the fair Wednesday to Sunday, 30 November – 4 December.
General Admission: USD 25
Students & Senior Citizens (with valid ID): USD 15
Tickets are valid for one day only.

Design Miami/, the global forum for design, will hold the 2011 edition of its show November 30 – December 4, in a custom structure, erected adjacent to its sister fair Art Basel Miami Beach. The fair boasts a newly expanded gallery program with choice exhibitors from America, Europe, Asia and Africa presenting important works of 20th and 21st century design, including furniture, lighting and objets dâ€™art. This yearâ€™s fair will see a 50% increase in participating galleries and will host a program of Talks, Satellite Exhibitions and custom commissions exploring the relationship between design and architecture.

Design Miami/ has become the destination for collectors seeking both established and cutting-edge emerging design for private and museum collections. Each fair presents a competitively curated selection of international galleries â€“ all top specialists in their fields â€“ representing important works by French architects of 40s and 50s, Brazilian and California Modern, Scandinavian Mid-Century, Postmodern Italian design, the French 60s and 70s, Korean craft, artistsâ€™ and designersâ€™ jewelry and a large spectrum of experimental contemporary work from both lauded established and emerging designers.

Alongside these venerable galleries, Design Miami/ organizes a cultural program that profiles established and up-and-coming designers, commissions new architectural and design work and brings together luminaries from the worlds of design, art, fashion and architecture to discuss their influences and process.

A highlight of this Decemberâ€™s show is the site-specific installation by Designer of the Year Award winner, UK-based architect David Adjaye. As his award commission, Adjaye will create a pavilion, entitled Genesis. Adjaye calls Genesis his first work of â€œgiant architectural furnitureâ€ that combines structure, seating,
windows and doors into a single gesture.

For the second consecutive year, Design Miamiâ€™s Design Talks series will be moderated by W Magazine Editor-in-Chief Stefano Tonchi. Over the course of three days, these conversations will include a selection the worldâ€™s top architects, discussing their careers, collaborations and passions.

Design Miamiâ€™s ambitious curatorial program and investment in bringing the most exciting names in design to the fair would not be possible without the generous commitment of its partners. Audi, Design Miamiâ€™s Exclusive Automotive Sponsor, Fendi and Swarovski Crystal Palace will unveil new design projects at the fair; Veuve Clicquot and Cappellini also continue their support with the 2011 show.