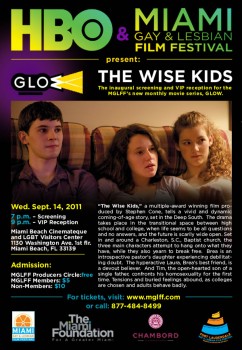 The Miami Gay & Lesbian Film Festival is debuting their its monthly movie series â€œGLOWâ€ by presenting â€œThe Wise Kids,â€ a multiple-award winning film produced by Stephen Cone. â€œThe Wise Kidsâ€ tells a vivid and dynamic coming-of-age story, set in the Deep South. The drama takes place in the transitional space between high school and college, when life seems to be all questions and no answers, and the future is scarily wide open. Set in and around a Charleston, S.C., Baptist church, the three main characters attempt to hang onto what they have, while they also yearn to break free. Brea is an introspective pastor’s daughter experiencing debilitating doubt. The hyperactive Laura, Brea’s best friend, is a devout believer. And Tim, the open-hearted son of a single father, confronts his homosexuality for the first time. Tensions and buried feelings abound, as colleges are chosen and adults behave badly.

The MGLFF is a critically acclaimed event, now in its 14th year, held throughout South Florida in the world-renowned historic South Beach district and throughout Miami-Dade county. The MGLFF is celebrated for its program of feature films, documentaries and short films by, about and of interest to the gay, lesbian, bisexual and transgender (GLBT) communities. In 2010-2011 screenings and special events drew more than 13,500 attendees from greater Miamiâ€“Dade and Broward counties, as well as national and international visitors. The MGLFF remains active outside of the film festival to produce the Ft. Lauderdale Gay and Lesbian Film Festival every October and provide year-round advance, archival and educational screenings along with other social events.