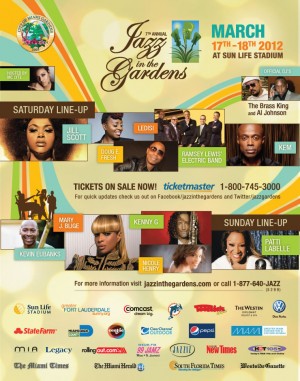 â€œLucky 7thâ€ year aiming to be best ever!

Tickets go on sale Friday November 11th, 2011 at 11:00AM through all Ticketmaster outlets, www.ticketmaster.com and www.jazzinthegardens.com

â€œI am elated about the success of â€œJazz in the Gardensâ€ and really feel like Iâ€™ve made an impact on the community during my time here as Mayor. I remember when no one knew anything about the event and now everyone has the desire to be involved! â€œJazz in the Gardensâ€ has become so much more than just a music festival. Itâ€™s become a reunion point for friends and family, a source of economic opportunity for small and large businesses and a vacation destination for adults seeking a break from the winter cold,â€ said City of Miami Gardens Mayor Shirley Gibson. â€œThis may be my last year as Mayor, but I know â€œJazz in the Gardensâ€ will continue to grow, and I look forward to attending the festival year after glorious year.â€

This year the City has partnered with AEG Live to produce and showcase the 7th Annual Jazz in the Gardens as a premiere festival in the country. AEG Live, one of the world’s leading concert promotion and touring companies is devoted to all aspects of live entertainment. The current and recent concert tour roster includes artists such as Taylor Swift, The Black Eyed Peas, Bon Jovi, Usher, Carrie Underwood, Daughtry and Justin Bieber to name a few. AEG Live is also the largest producer of music festivals in North America.

Mayor Gibson created â€œJazz in the Gardensâ€ seven years ago to help boost the City of Miami Gardenâ€™s economic growth and since then the festival has positioned itself as one of South Floridaâ€™s most highly anticipated musical events, attracting audiences from all across the nation and abroad. In March 2011, over 45,000 people attended the music festival.

The annual â€œJazz in the Gardensâ€ music festival formula for success is simple: a stellar line-up, great exotic foods, affordable ticket prices and amazing weather. The 7th annual â€œJazz in the Gardensâ€ music festival will undoubtedly live up to its reputation that has been established over the previous years as one of the premiere music festivals in the country. For the past six years, it has enjoyed unprecedented growth, constantly delivering stunning increases in attendance, enjoying a burgeoning worldwide popularity and attention for the beautiful City of Miami Gardens, with attendees from as far as Canada, Europe, and the Caribbean. â€œJazz in the Gardens 2012â€ performers will be announced soon.