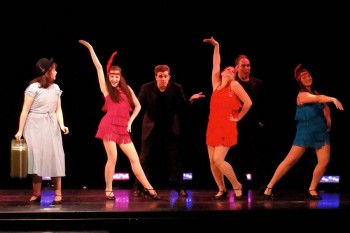 Florida hosts a Super Nova Production featuring Andrew Koslosky and his Broadway Blockbusters who take the stage in American Fantasy – A Tribute to Hollywood’s Greatest Musicals, September 15 â€“ 18, 2011 at the Historic Parker Playhouse and Sunrise Theater.

Starring internationally known tenor Andrew Joseph Koslosky, who has toured with musicals such as The Music of Andrew Lloyd Webber, as the Captain in The Sound of Music, Ravenol in Showboat, and Jeffrey in Godspell, brings his powerful beautiful voice to American Fantasy.

The group is fresh from its summer productions, the 2011 Broadway Blockbusters Productions Summer Musical Review and a limited engagement showing of American Fantasy II- A Tribute to Hollywood’s Greatest Musicals, August 5-20 at the Historic Flushing Town Hall and continues to South Florida.

In addition to Koslosky’s talent, Broadway Blockbusters is a group of more than 15 professional actors and young upcoming talents. Super Nova will enthrall you with live performances of your most beloved musicals.

Classics from Singinâ€™ in the Rain, The Wizard of Oz, Mame, Oklahoma, The Sound of Music, South Pacific, and Thoroughly Modern Millie, honoring greats such as Rodgers, Berlin, MGM, Disney and many others.

American Fantasy’s Associate Producer, Clyde Bullard has been the Producer at Flushing Town Hall since 1998. An accomplished bassist, Bullard began his career working for The Joseph Papp Shakespeare Festival Touring production of Two Gentlemen of Verona.

Since then, he has played for Broadway shows such as Hair, Pippin, A Chorus Line, Amen Corner, The Wiz, Bubbling Brown Sugar, Godspell and Donâ€™t Bother Me I Canâ€™t Cope.