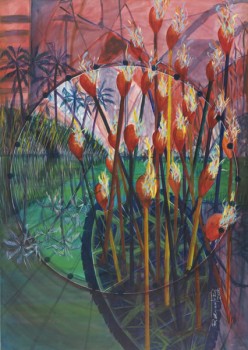 Unearthed in 1998, this archaeological site is regarded as being of local, regional, and statewide significance and perhaps even of national significance, as it is believed to be the only cut-in-rock prehistoric structural footprint ever found in eastern North America.

Hundreds of holes were exposed in a layer of Oolitic limestone bedrock, twenty-four of the largest holes comprised a perfect circle, 38 feet (12m) in diameter, and excavation found a variety of artifacts ranging from human teeth to ancient tools.

It is believed that the Tequesta Indians, a local tribe whose known tools matched some of the shark tooth-related artifacts found during excavation, inhabited this site. Theorists have suggested that the holes were structural postholes or part of the foundation for a building.

Some believe the building was used for ceremonial purposes, as animal bones and unused tools appear to be offerings.

Eleazar Delgado’s Behind the Lights: Miami collection is wholly inspired by Miami’s origins and gives a vibrant and colorful perspective on the visionaries that built our city, like Henry Flagler and Julia Tuttle, while also memorializing historical events, such as Billie Holiday’s performance at The Lyric in Overtown. His artwork’s historical and social slant have been featured on PlumTV’s Plum Daily, on CNN EspaÃ±ol’s NotiMujer, The Miami Herald, El Nuevo Herald, Diarios Las AmÃ©ricas, Social Miami, Miami Magazine, Ocean Drive and 944 among others.